I promise I won’t generally write about hotels, but Hotel Schloss Mühldorf was a pretty special place, and because of this we struggled to leave!! 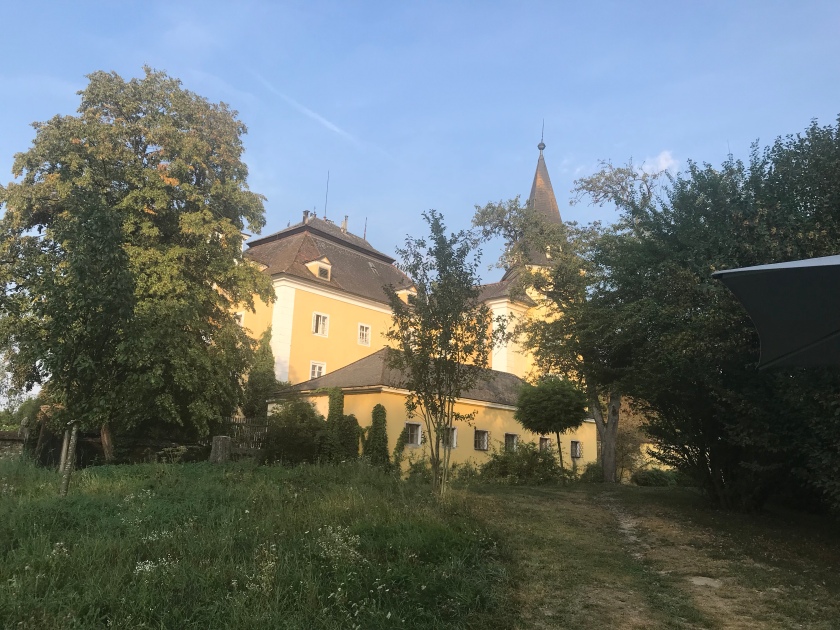 We started the day with a swim in what was actually a pond but made to look like a swimming pool. And it’s water filtration was a reed bed. In fact all but it’s shape was very natural and just delightful. 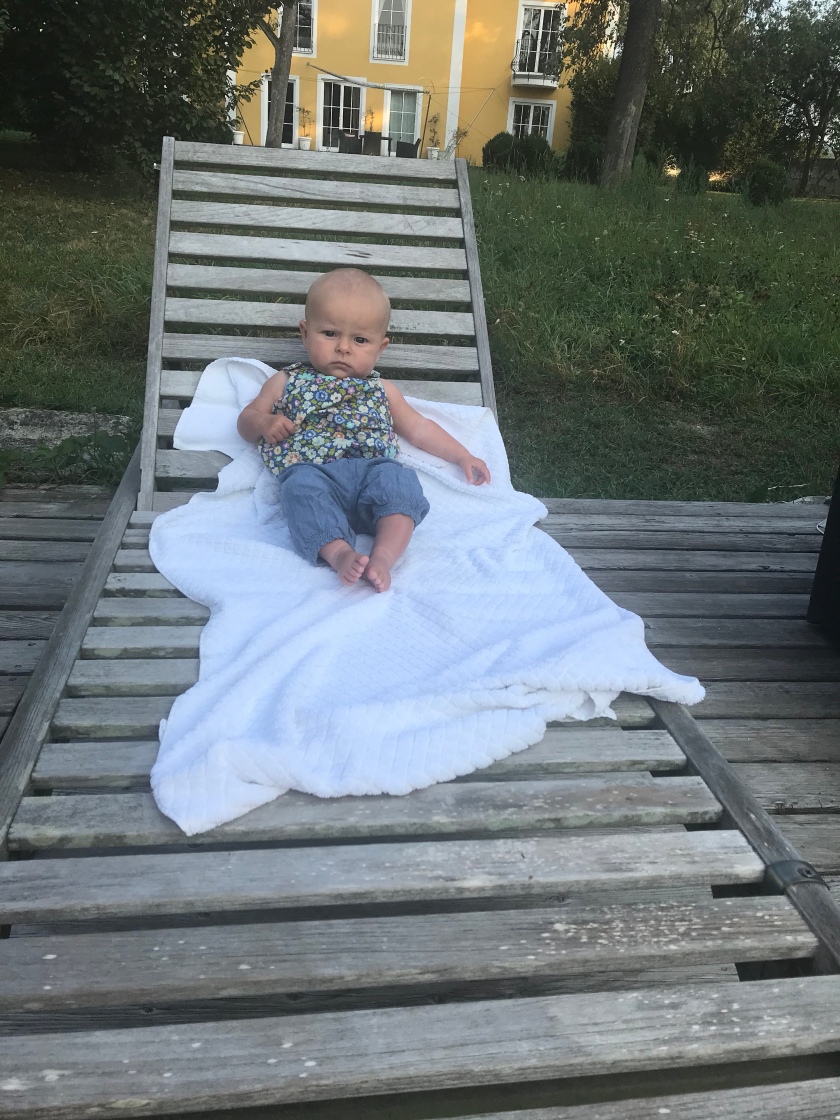 Even the grey cat was pondering a swim!

From there to breakfast….. I’m not sure I have ever seen such a beautiful breakfast buffet! 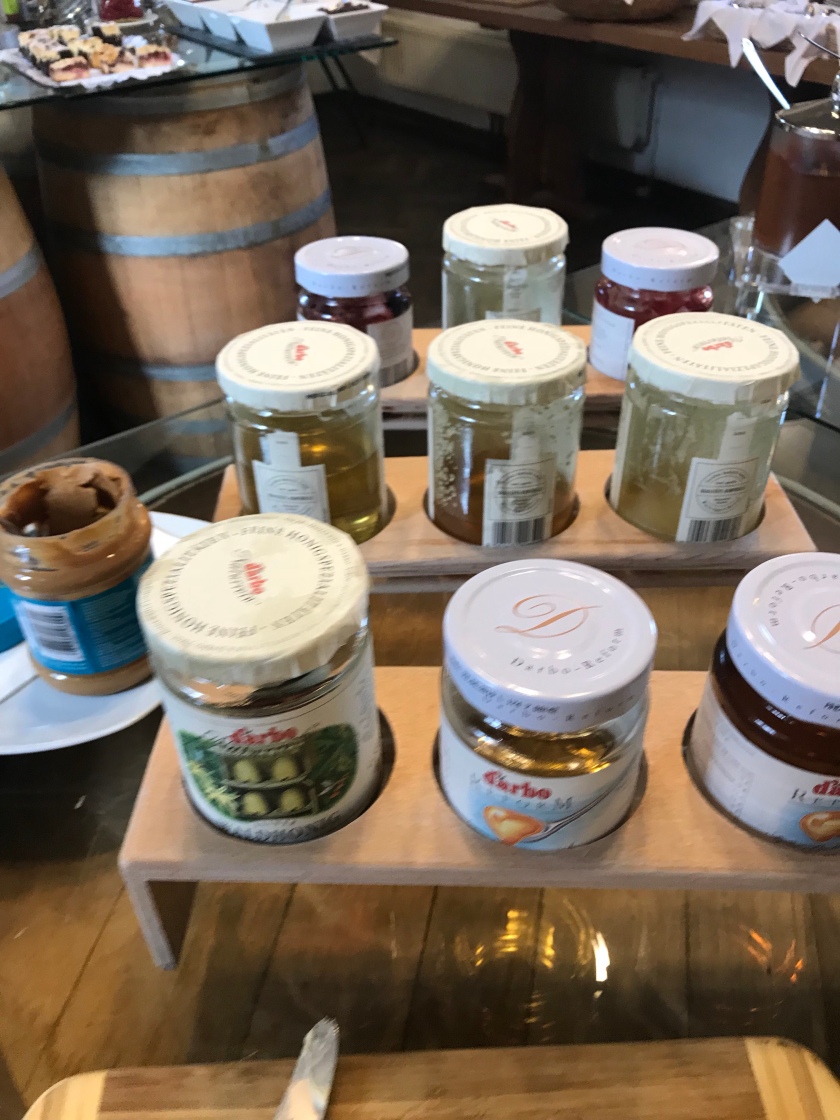 Well, we stayed long enough but could have stayed for hours more!

One final stroke of grey cat…. 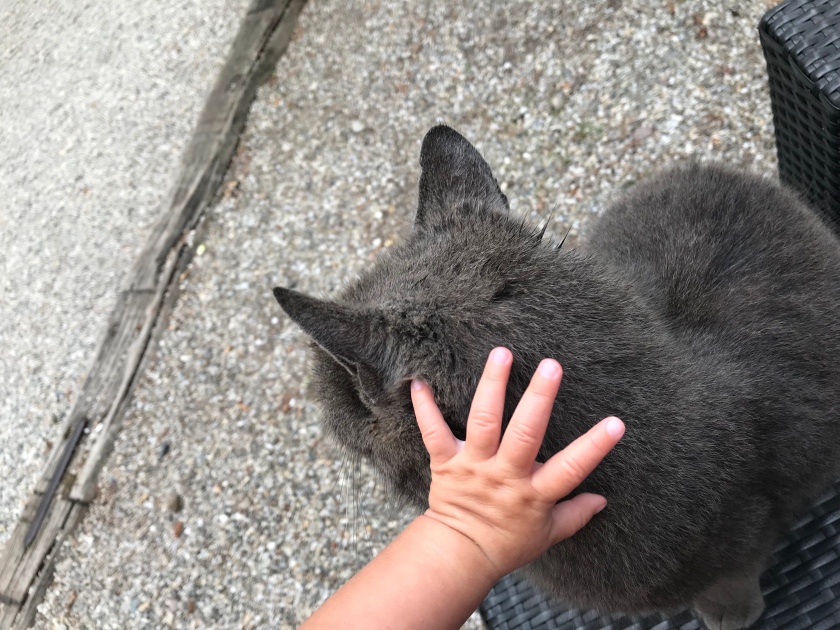 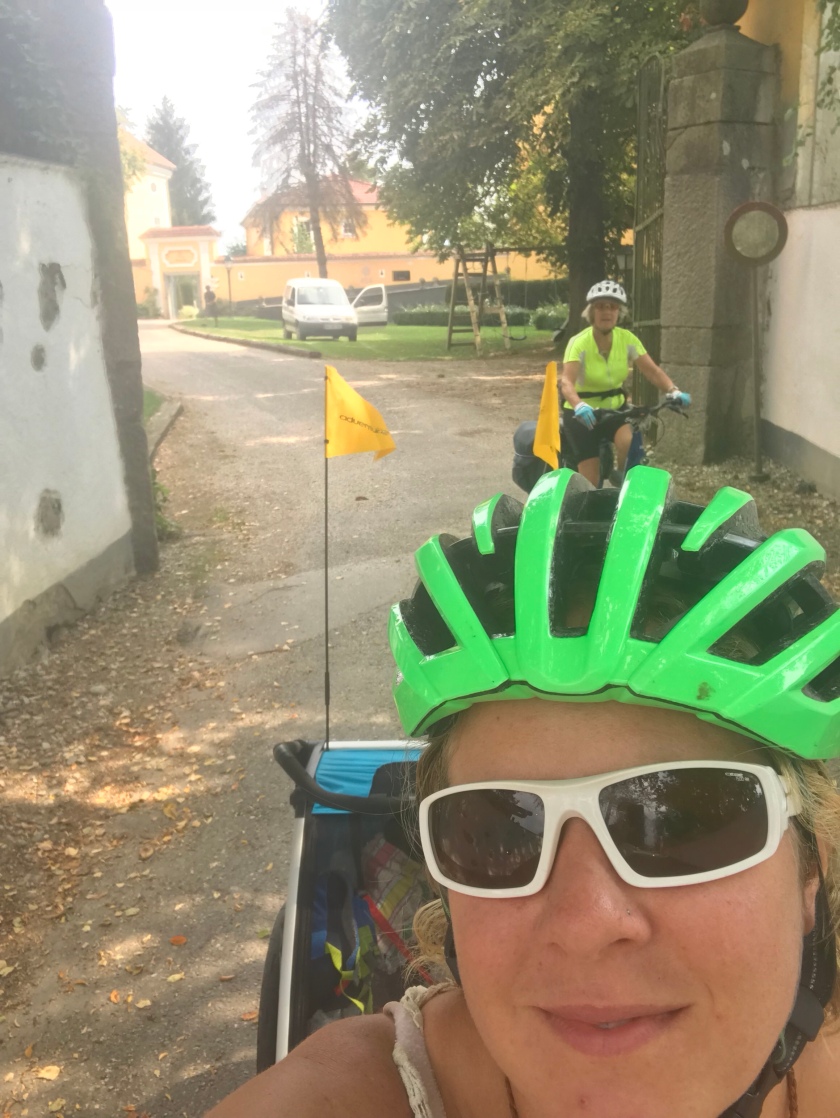 Evie was asleep within 100m of cycling off after the excitement of the morning. That was the upside to leaving so late. The downside was it was hot hot hot again. 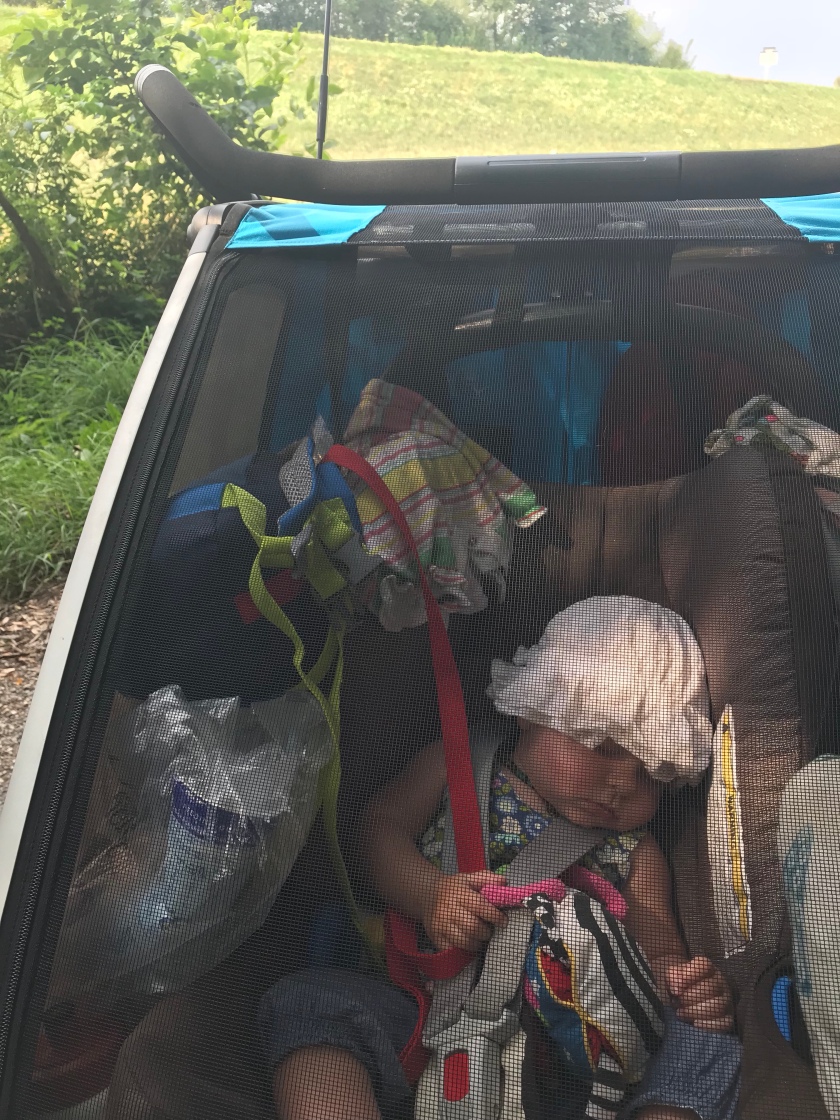 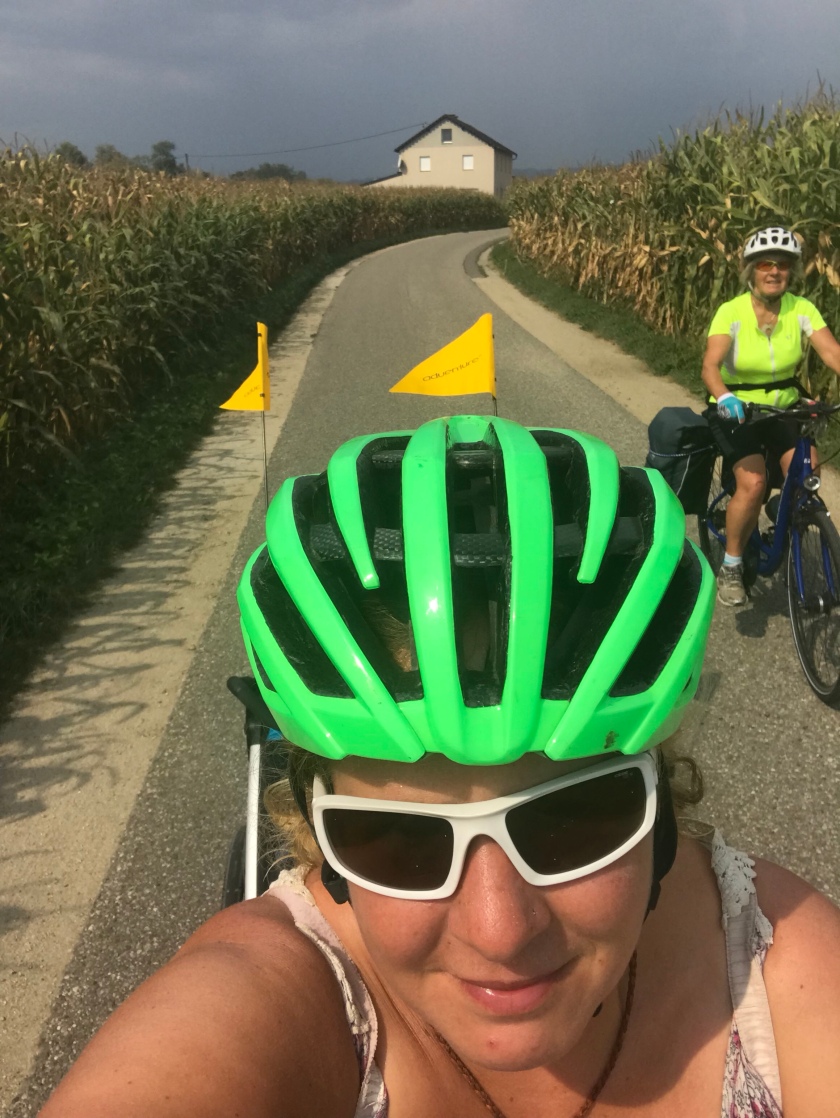 Our first place we cycled through was Goldwörth, where they tried to pan gold somewhat unsuccessfully. We peddled along pretty lanes surrounded by agricultural crops until we met up with the official route again.

This section of the Danube is very wide and is surrounded by much flatter woodland. We even saw the bees that made the mornings woodland honey! Well the hives were very jolly and in woodland anyway.

Inspiration! Came across a family from Canada who are away cycle touring and camping for two months! It can be done. And they had two children, a 6 month old and a 2 year old. All they had were pannier laden bikes and a laden trailer. They were even carrying a balance bike for the 2 year old. Their secret, only to aim at about 30km a day in one hour stints. 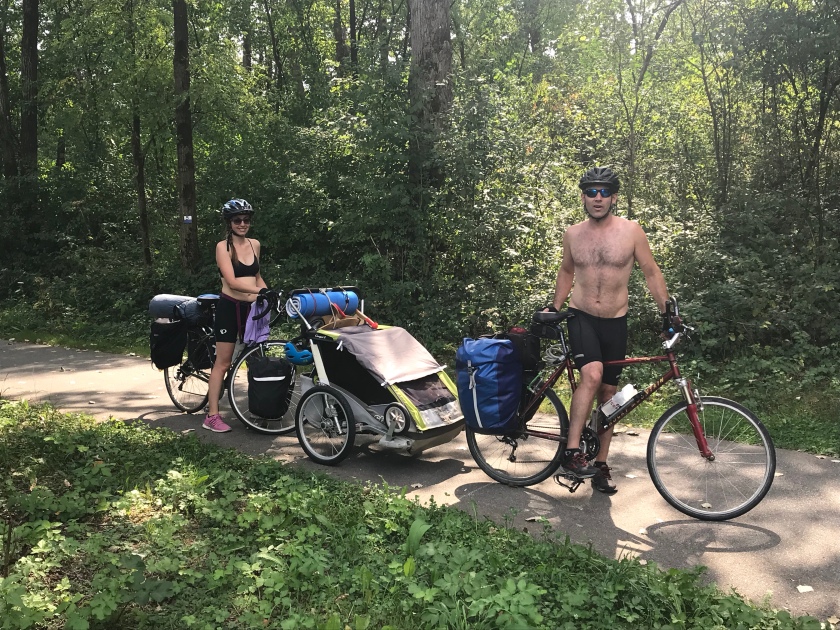 The main town of note was Ottensheim, with its lovely main square. Had Evie not still been sleeping then it would have been a fabulous place to stop and relax over a drink. It’s church was surprising. Looked super old on the outside and then modern on the inside. 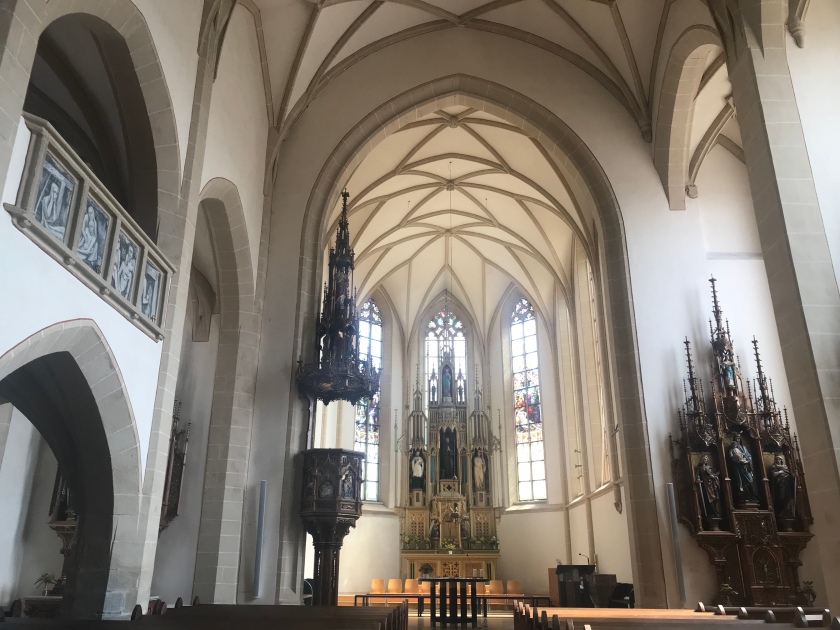 The next stage of the journey was not so nice, we continued on the north bank as there was a cycle path off the road, so there was no risk from traffic, but it wasn’t pretty as we cycled through Linz suburbia. The South path though was on the road, even if prettier, not recommended when towing a child.

We thought that we would go and see The old part of Linz, so cycled into its Hauptplatze. It was nice, full of cafes. But we were hot, we had a packed lunch, so the shores of the Danube were calling louder! And somehow Evie was still asleep. 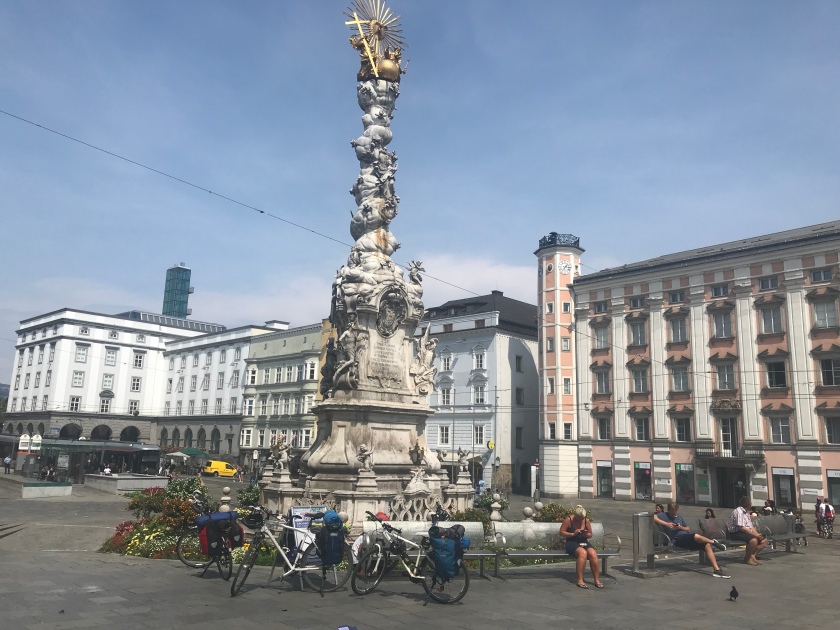 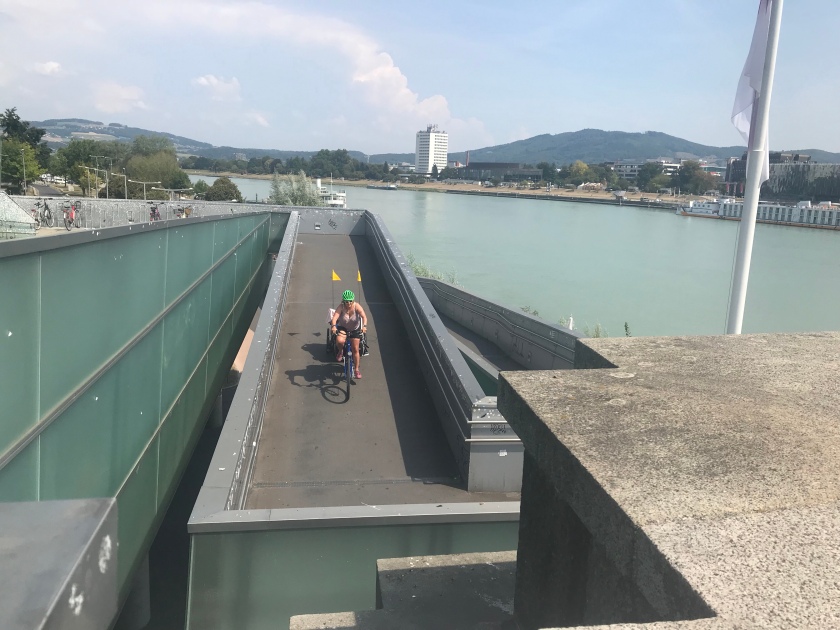 At this point we were back to Costa del Danube, with the pebbly shores full of sunbathers and people enjoying swimming safely downstream before getting out, walking back upstream and repeating the whole thing. 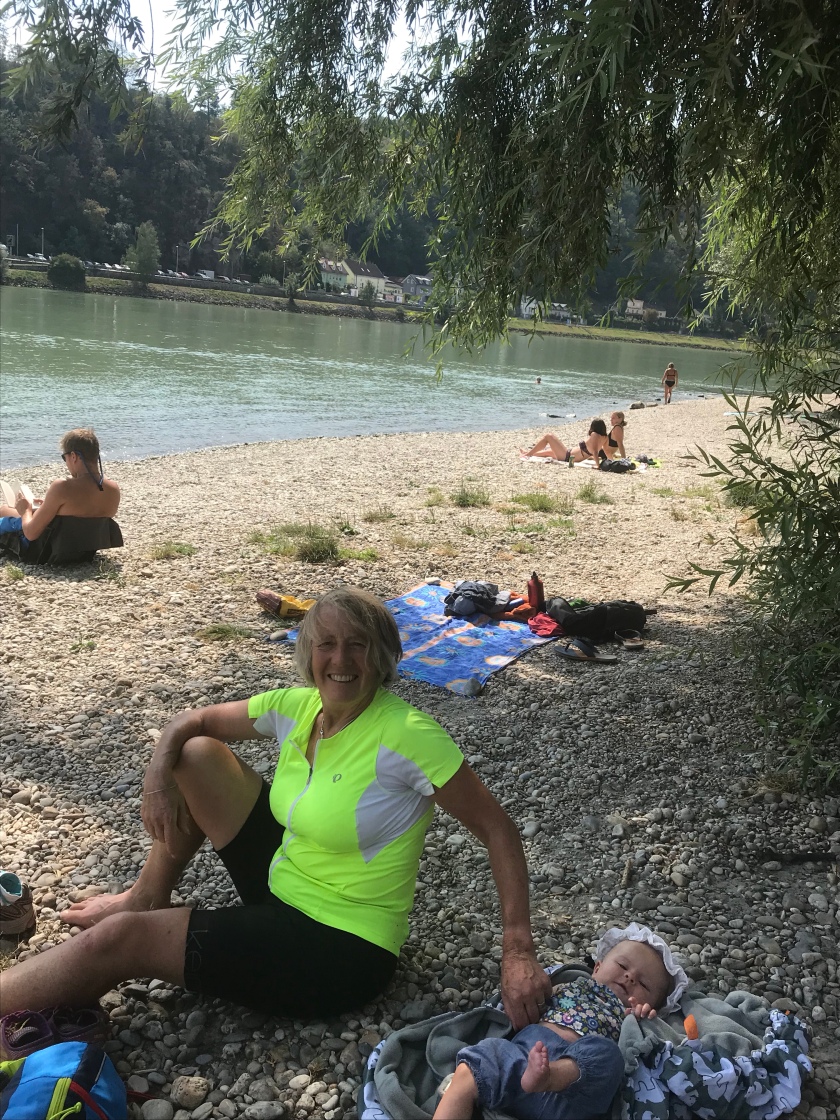 Even Evie had a bit of time in the very shallowest parts of the shallows. She wasn’t so sure of the waves from passing boats but did enjoy splashing and playing with pebbles. Without knowing it I’m sure she also enjoyed cooling down!

Highly reluctant to leave, but we still had nearly 30km to cycle in the unrelenting sun. Thankfully the break had tired Evie out and she slept again, but we were running out of energy.

Still, trying to see the positives, there were lots of beautiful swans, and the distance to our end point was getting closer, even if it didn’t feel like it.

Evie woke at an appropriate moment, and we found ourselves in a ‘Texan’ bar, where we parked our bikes in the ‘Harley’ spaces! The music was great so Evie had a dance. Then there was even some live music. Evie got into the swing off it, desperate to join everyone else drinking from beer glasses! Sadly we had to leave the fun behind, and Evie was NOT happy to go!! 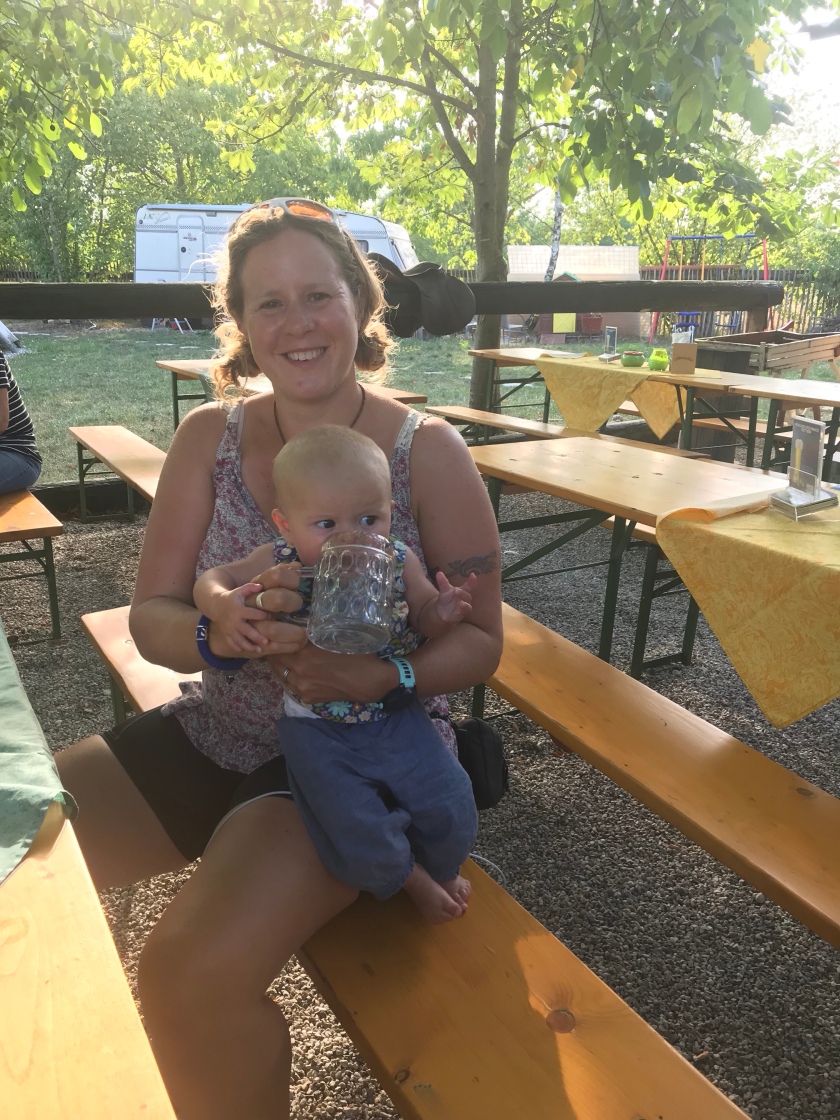 This made the last miles very hard, and seem even longer than they were already feeling. Typically, she fell back to sleep just as we were arriving at Au an der Donau! But that was a good thing as it took us a while to find our accommodation and get sorted…..

Looking forward to a day around here tomorrow.