It’s a very long way from the Lake District to Devon so we had to make a stop or too along the way.

Picking one of the hottest days of the year to travel, the air con in the car decides not to work…. and Evie was a travelling star!

Before we even left we needed to get a puncture fixed for the long drive! 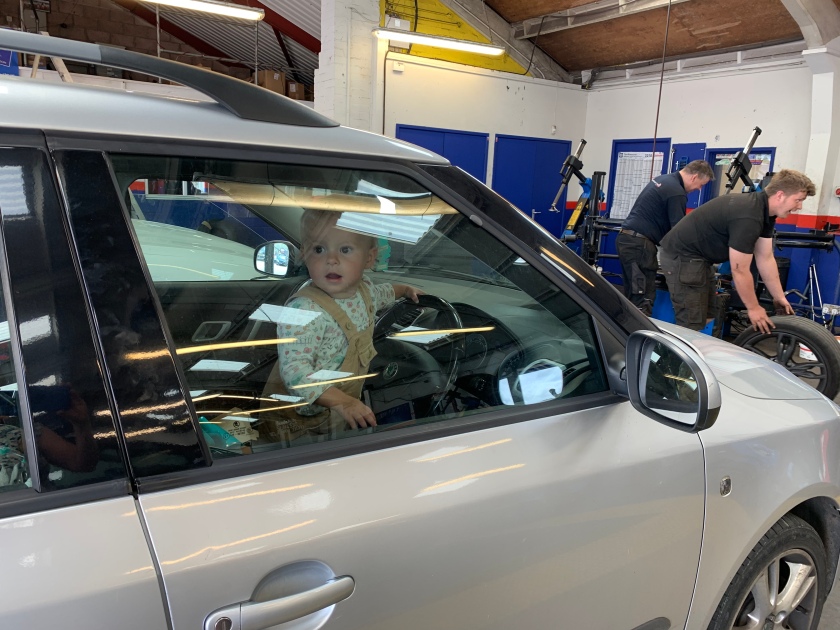 One of our many service station stops – Evie the racing driver takes to the wheel. 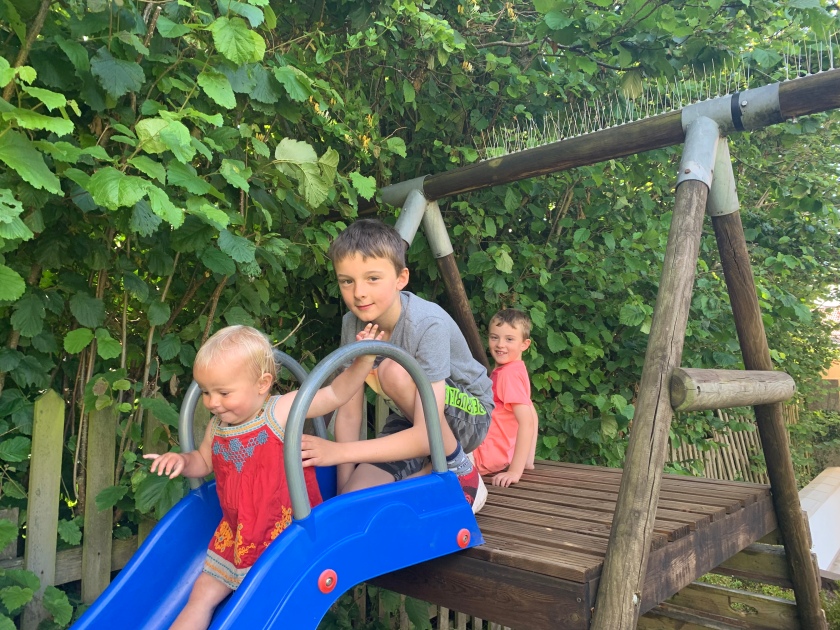 We eventually made it to near Bristol and a stop off with Evie’s cousins Joseph and Finley. They enjoyed both a late night play and a lovely morning play, leaving when it was nap time to continue on our way. 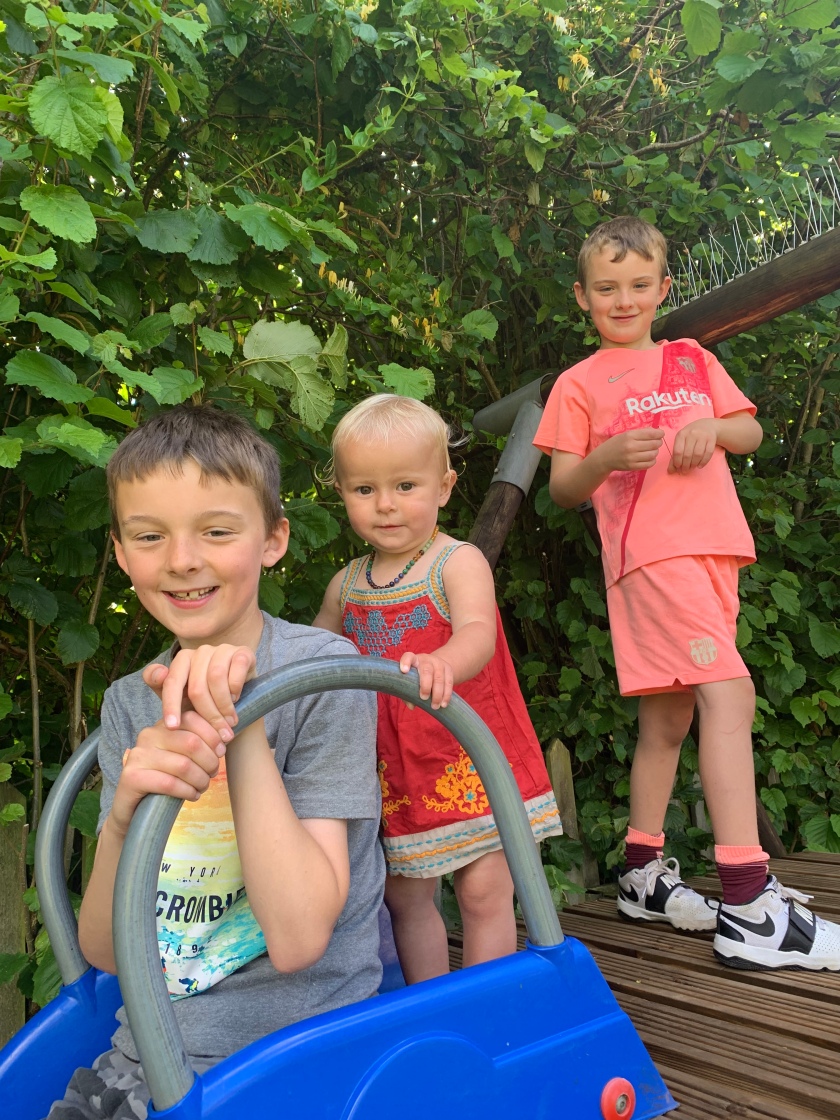 Next stop was a party, celebrating the 40th birthday of old university friends. Evie’s first toddler camping experience. She was very excited running in and out of the tent.

There was a lovely little pool in a river to play on, though Evie was not too sure about full immersion….. it was a tad chilly!

There was an exciting deep dark forest to explore, which she spent hours in with the other kids.

This was 8pm- she was still fighting sleep at 11pm with all the excitement going on! The fire eventually mesmerised her to sleep. 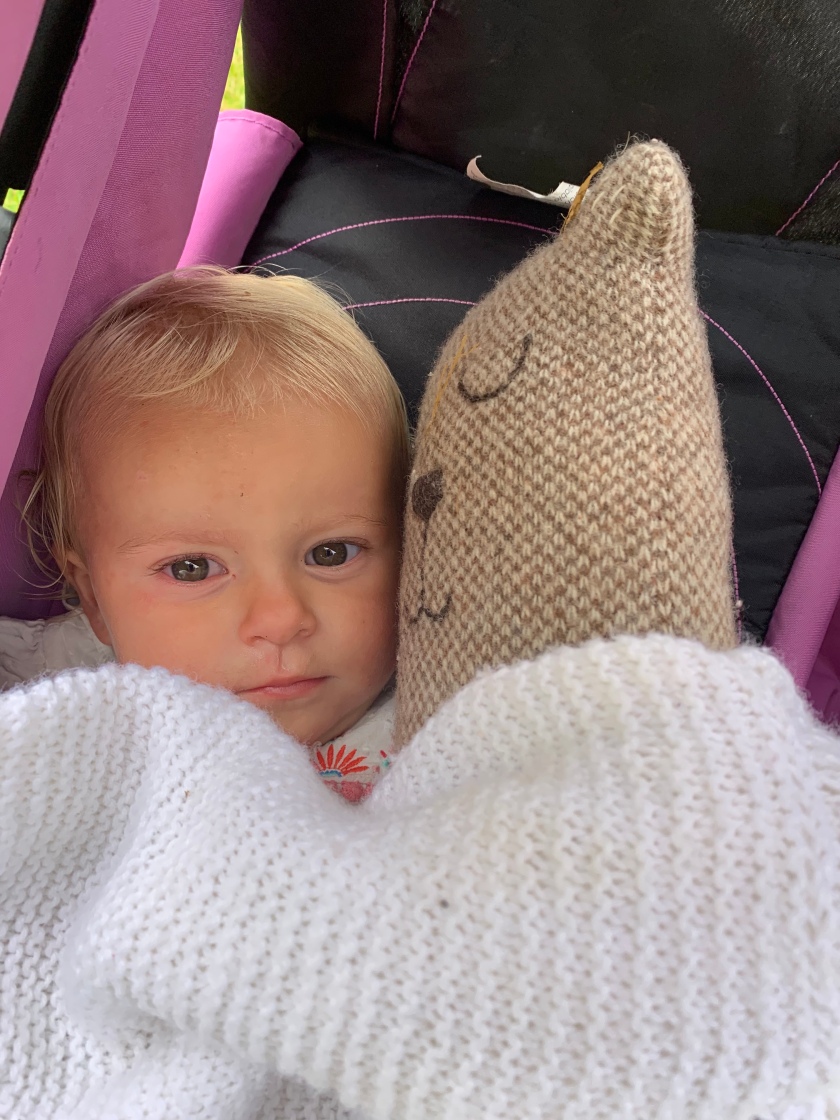 After not enough sleep and a LOT more playing I. The morning, she had a very hearty appetite!

Time to pack up, she was exhausted. By the time we had said our goodbyes and I had the car all packed she fell asleep as the engine started up!

A relaxing day in Sidmouth

Starting with a play at the park just down the road, this was a park we spent a lot of time in. 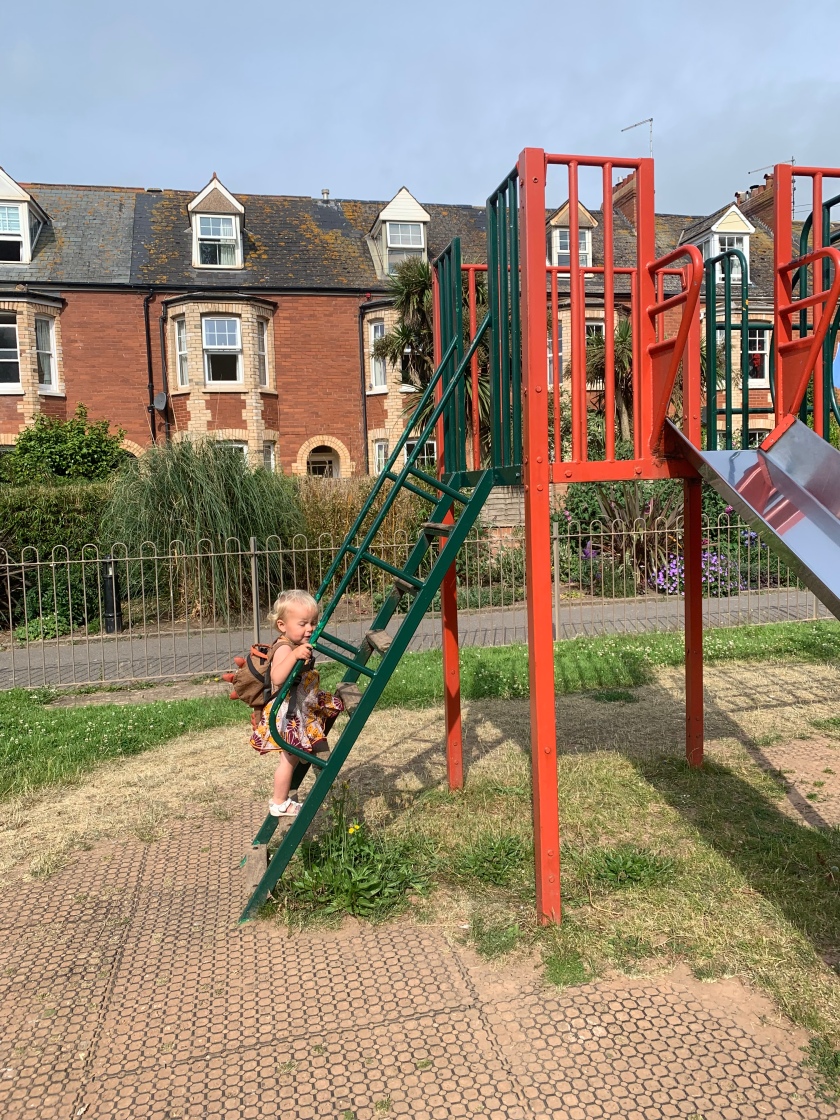 Just strolling along the front, some of the scenery was remarkable.

Why did we not bring our cossies on this first walk out. Thankfully a small place so back to the ranch to pick them up for a beach afternoon!

Evie was getting a lovely holiday with Hazie, Beth and Sally, and of course mummy!

On the beach, Hazel had kindly bought Evie a bucket and spade so there was lots of fun to be had with these. 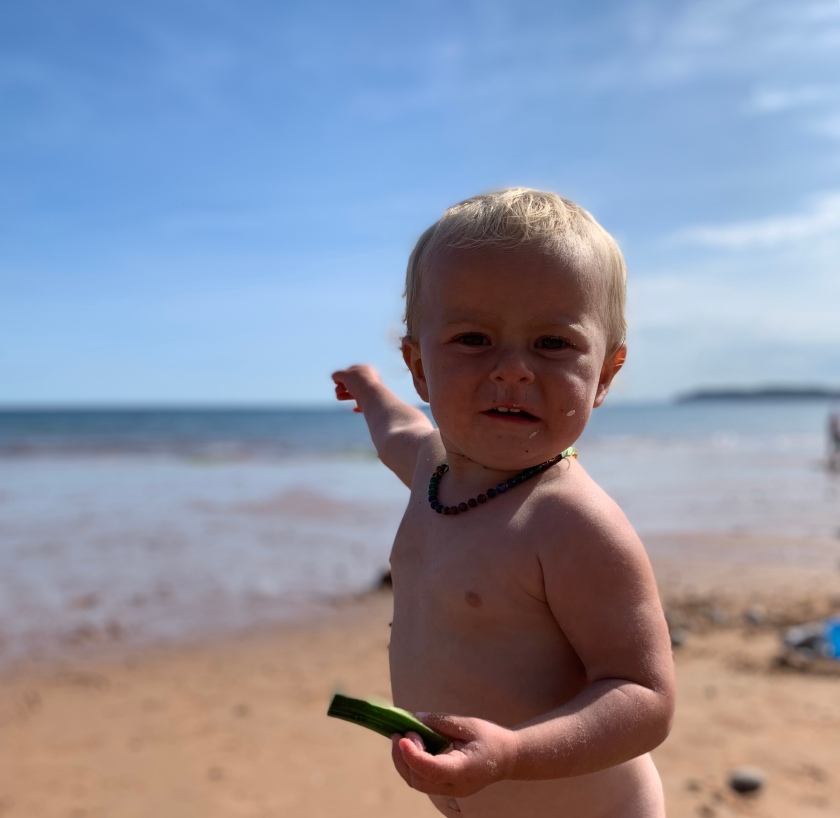 The seaweed was an amazing colour, but the way it moved in the water seemed to frighten Evie. I think she thought it was alive. 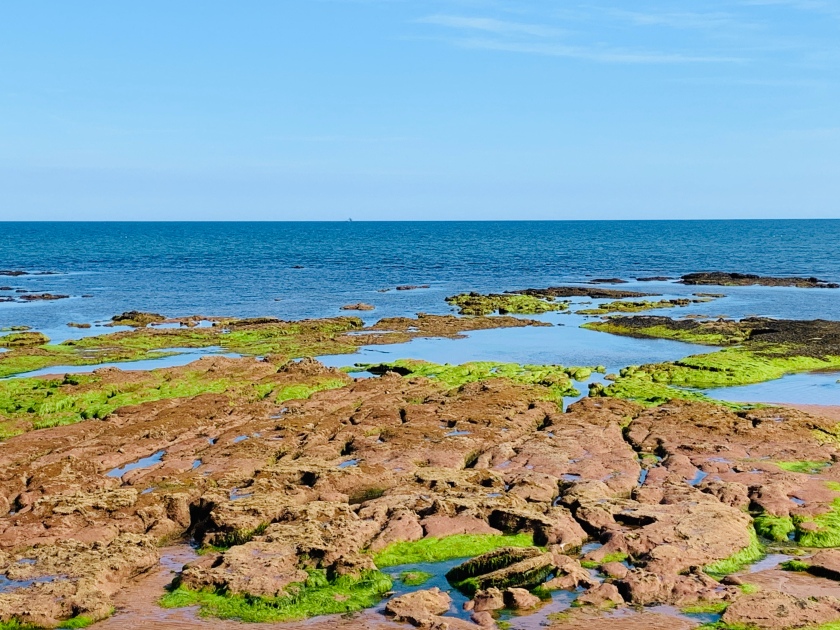 Some crazy stew steps to take you to the top of Sidmouth, I didn’t even try to carry the loaded pushchair up here!

We decided we deserved a drink. So with our drinks Evie got crayons. Not sure who enjoyed this more, sally or Evie…

And then for a spot of shopping on our walk back home! 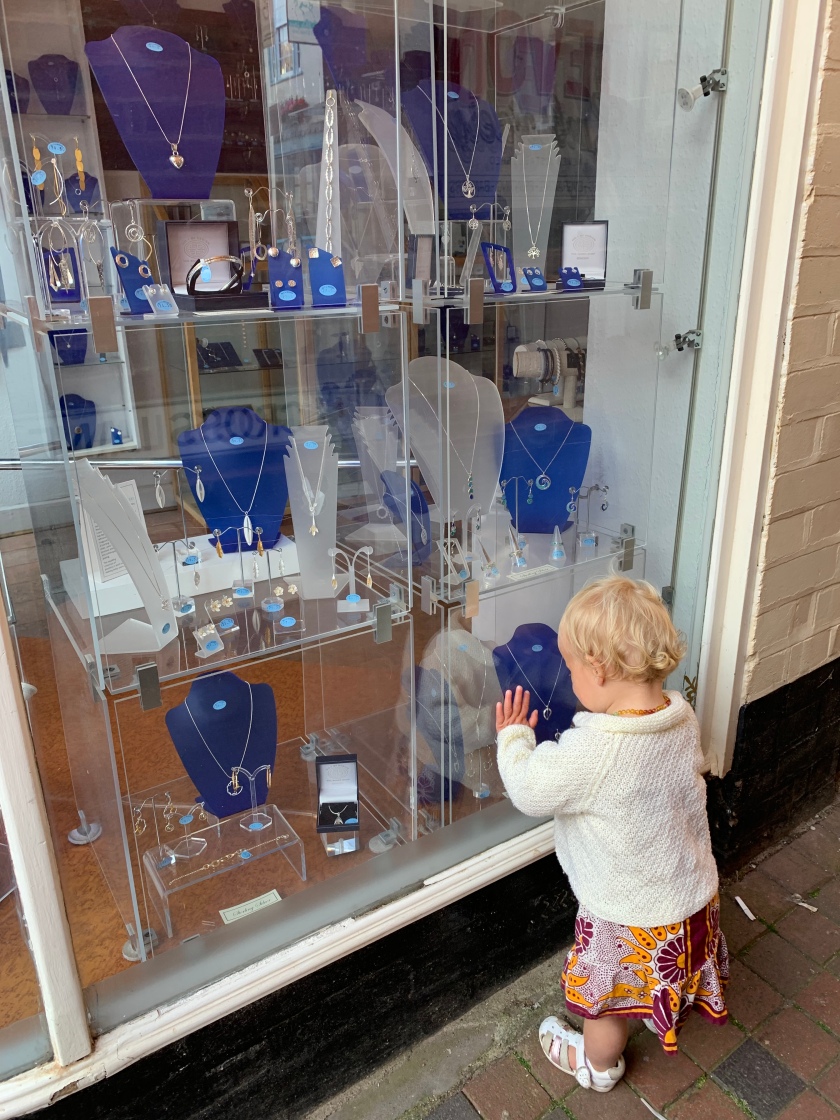 We needed to do a car drop for our walk to Beer today, so we loaded the bikes and Evie enjoyed a ride out first thing with Hazel and me

Then for a spot of lunch before getting loaded up into the pack!

So we set off much later than planned in the heat of the day (hot++) as we climbed up out of Sidmouth, the first of many steep climbs as it turned out!

However gorgeous views and meadow flowers made it all worthwhile.

Our first steep decent about to come to the beach far below. This one was a choice, but we had asked a walker from the opposite direction how many ups and downs and she said 4. We decided this was manageable. It turned out it was more than 4!!

Time for a spot of lunch and a play.

The stones were just beautiful and it was hard not to collect them all. We had a select few pebbles from this beautiful beach. 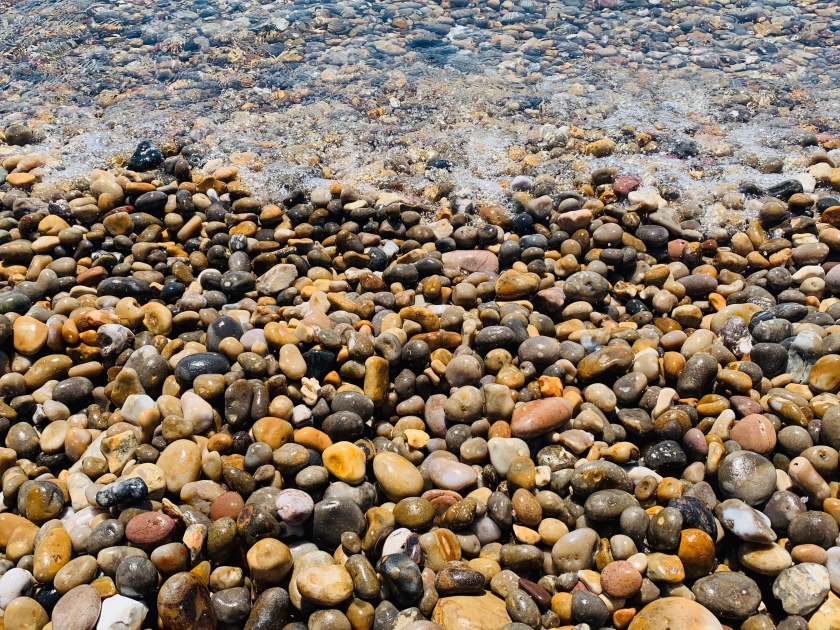 Then the dreaded steps…. Sally waits patiently at the top, and these were just a few of very many! 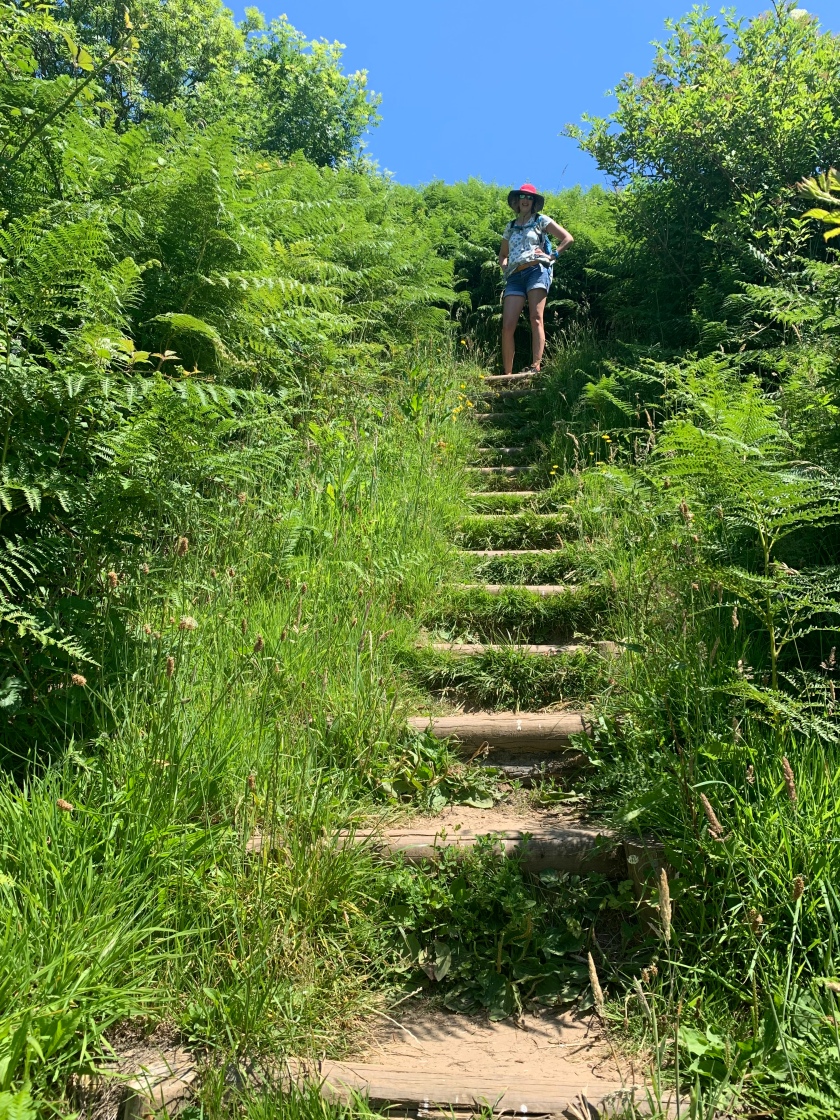 At this point we wanders at our sensibility of having dropped to the first beach. As we had no choice about this one. Hmmmm…. it was a long way down. 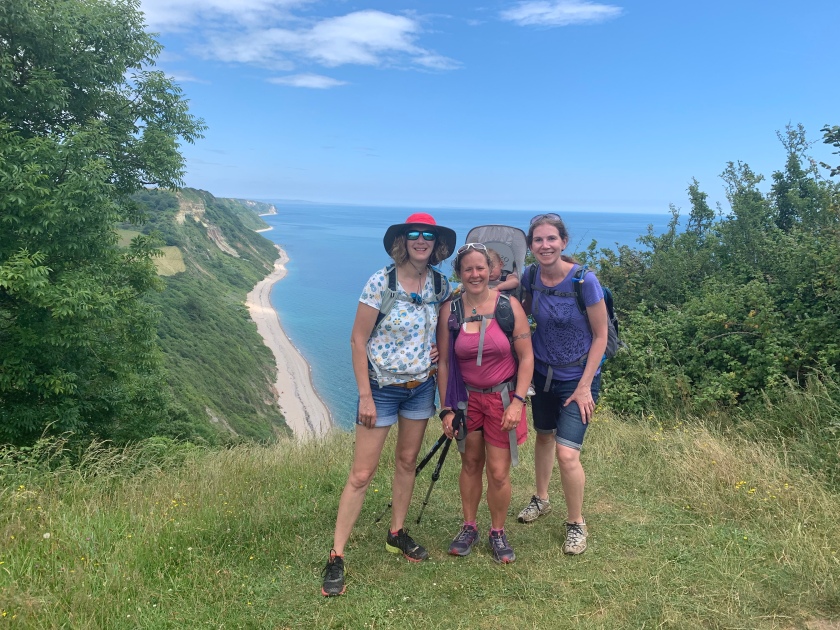 A gorgeous orchid in the verge

Keeping very jolly, Evie is waving at most things today!

Looking back at the headland we came from, via the beach we dropped down to!

Finally we meet up with Hazie, who has walked some of it solo as we failed to meet!

Into Branscombe for a much needed drink and snack, as I had run out of both water and food. It’s late afternoon and still a few miles to Beer… 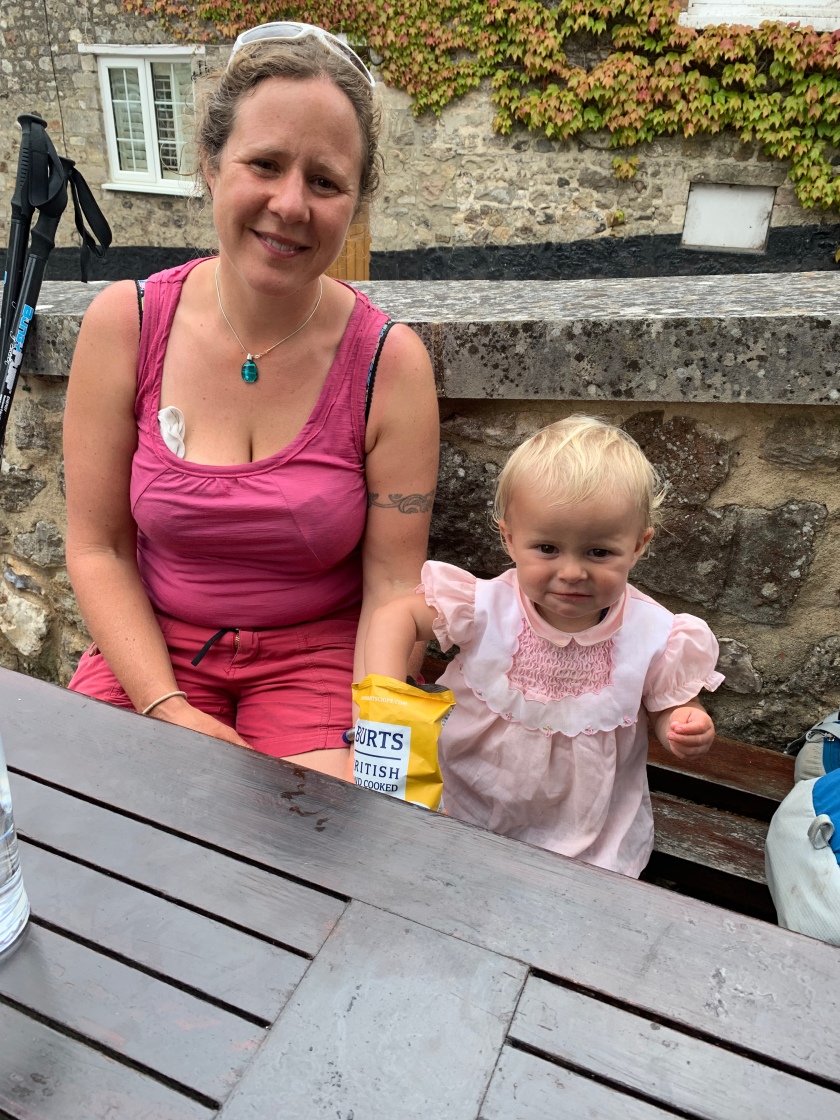 And then a great discovery. The bus stop is just up the road from the pub, and the last bus of the day is in 45 mins!! No second thought…. all totally worn out we were on that bus! Never before have I been on a bus on such narrow roads that the hedge is coming through the windows on both sides!

Arriving in Beer, it’s got so late. So nevermind that dinner we had planned , it’s fish n’ chips at the park!! Where Evie does lots of playing! 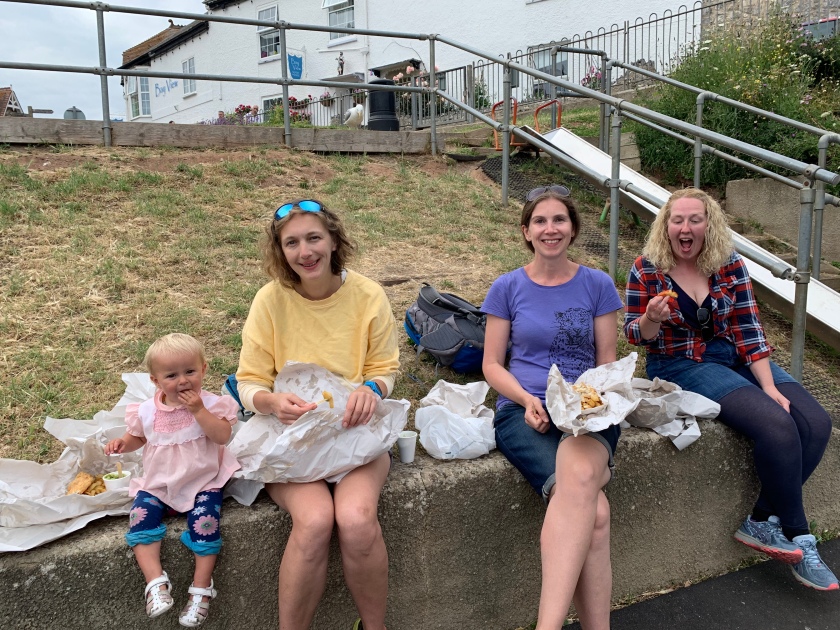 Time to get back to the ranch!

After the epic walk the previous day, it was decided another beach day was much needed! So we headed to Lyme Regis.

A very touristy place and on a hot day it was a true British summer beach scene!

Just around one corner were these divine clear waters, but for now we kept walking.

To the old harbour walk and the crazy steps.

And some rather fun RLNI welly dogs! 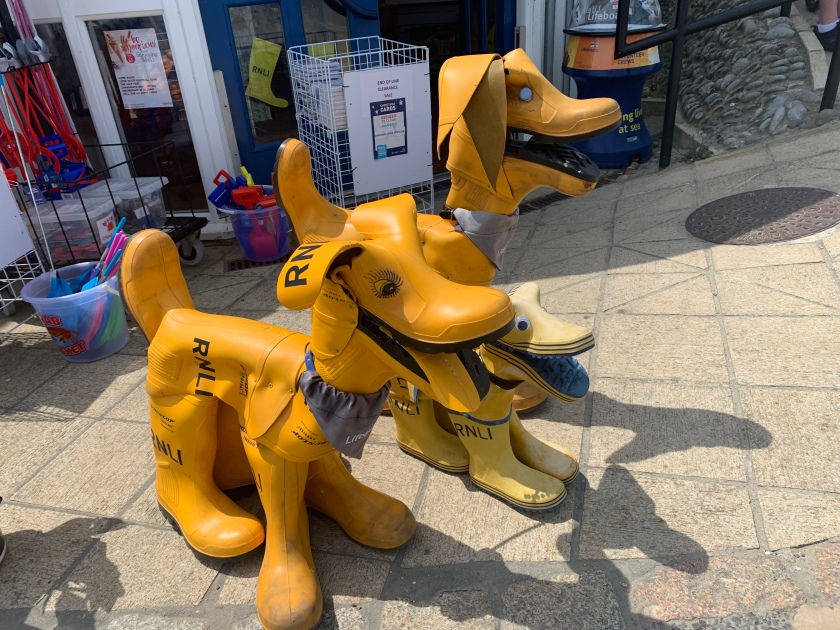 I got an ice- cream to share but someone got most of it!

But it was much needed before participating in the strongman competition!

It turned out the waves and stones tightened Evie she. We went to go for a swim, so we moved to the nearby sandy touristy beach instead so she could run around happily and eat more sand!

Enjoying a dip in the sea, as Evie swam out to join me (halting my swim)…

After more playing and a very lovely day out, it was time to head home…. and someone was exhausted!!

The next day it was time to stretch our legs again. We decided to walk to the nearby Ladram Bay – just over the hill!!

Past a very pretty Devon House 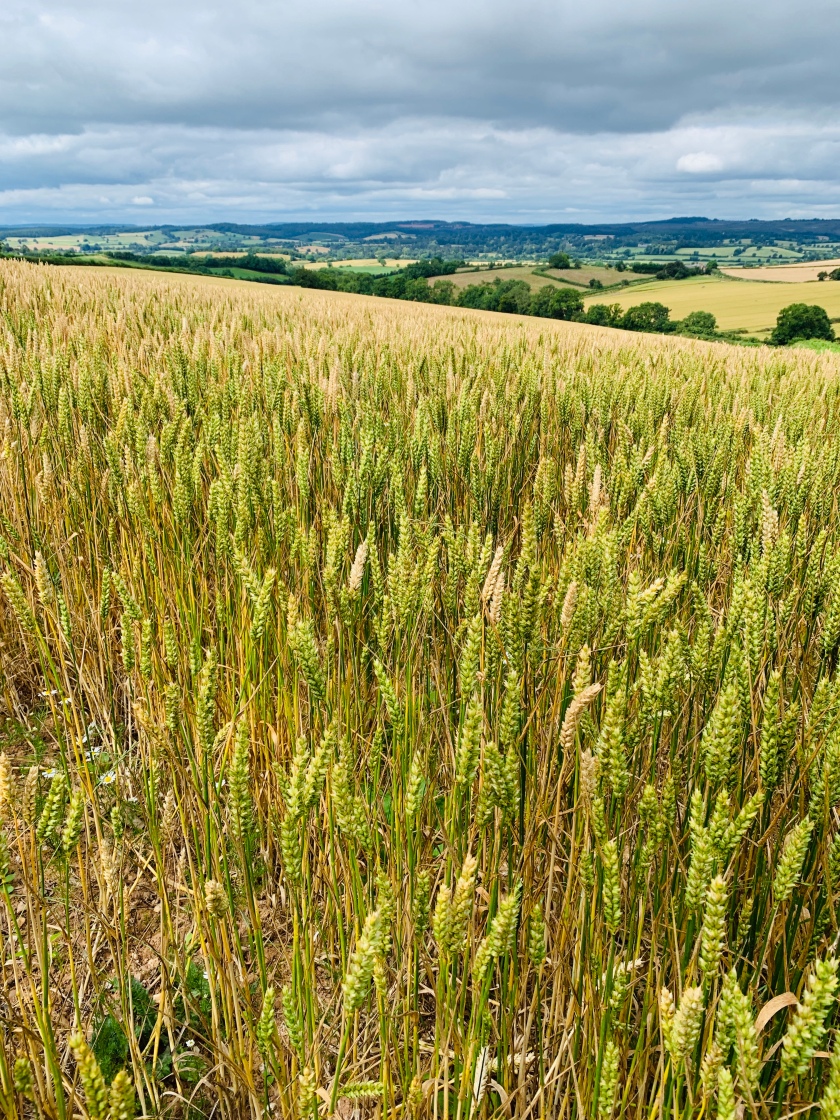 Passing through a tree tunnel, and heading down through a wood.

I grab an ice cream – but someone decided they wanted it!! 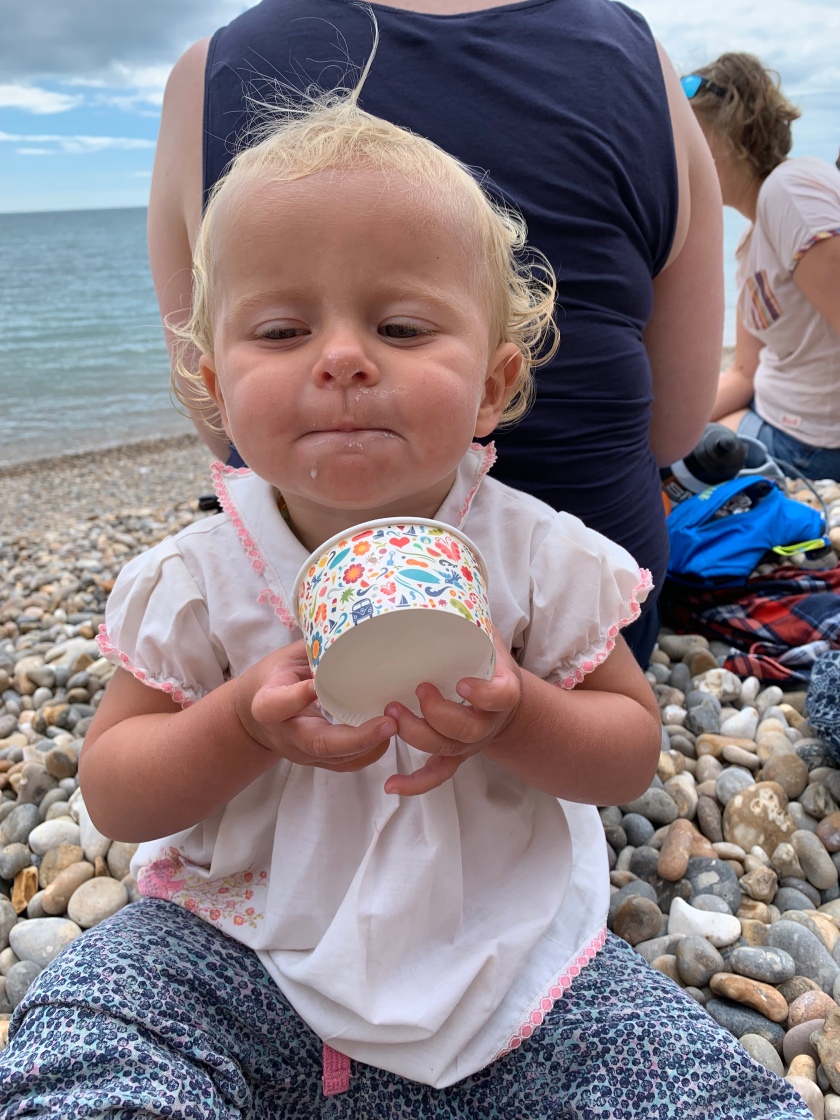 And then spends lots of time jumping on mummies tummy!! 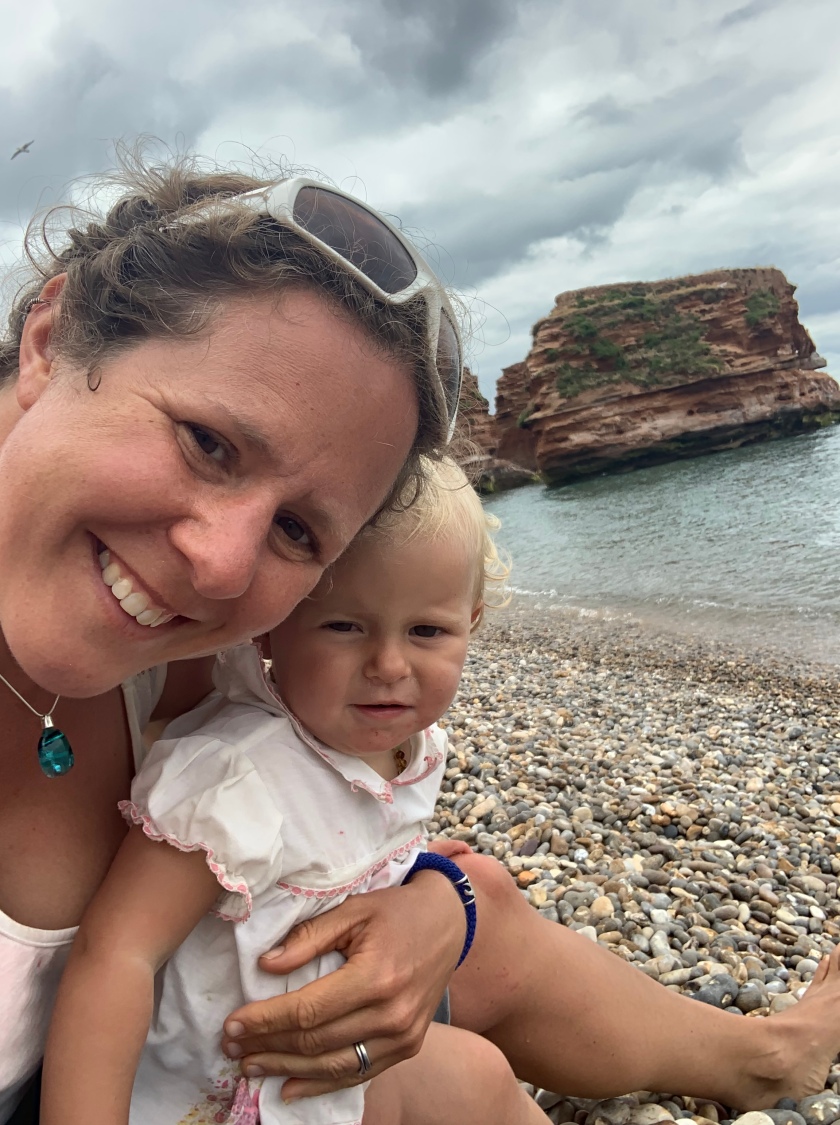 Quieter cuddles and then…. exhaustion hits!! 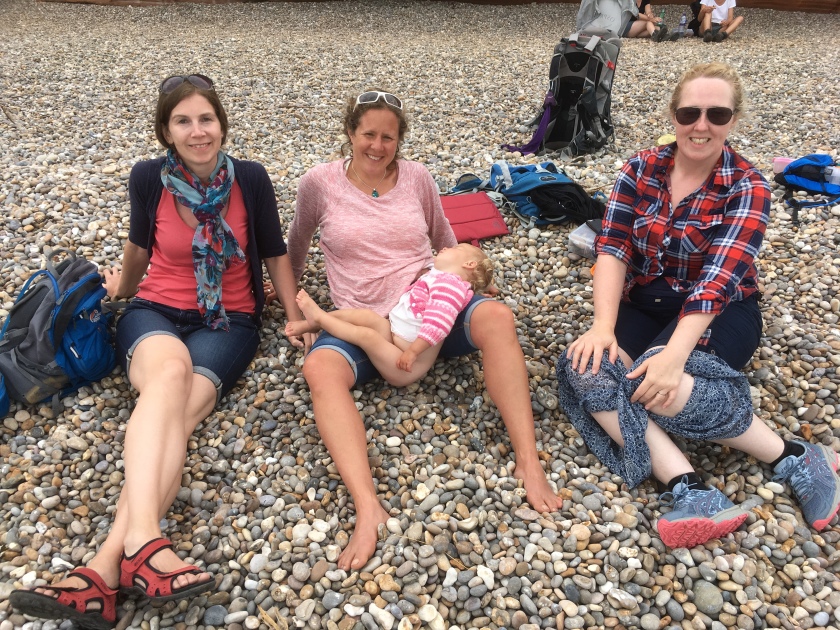 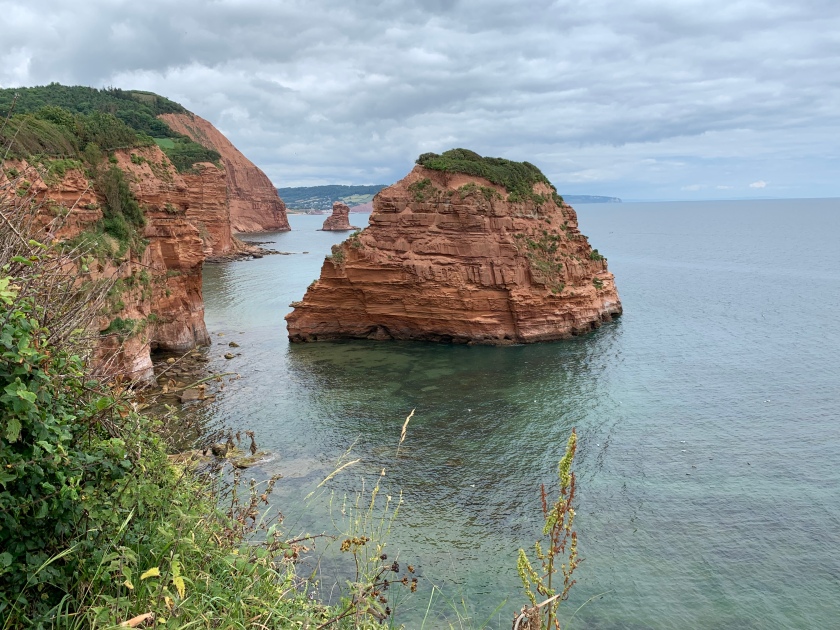 Waking back – we have something in mind, but not before enjoying the view of these stacks from the other direction. 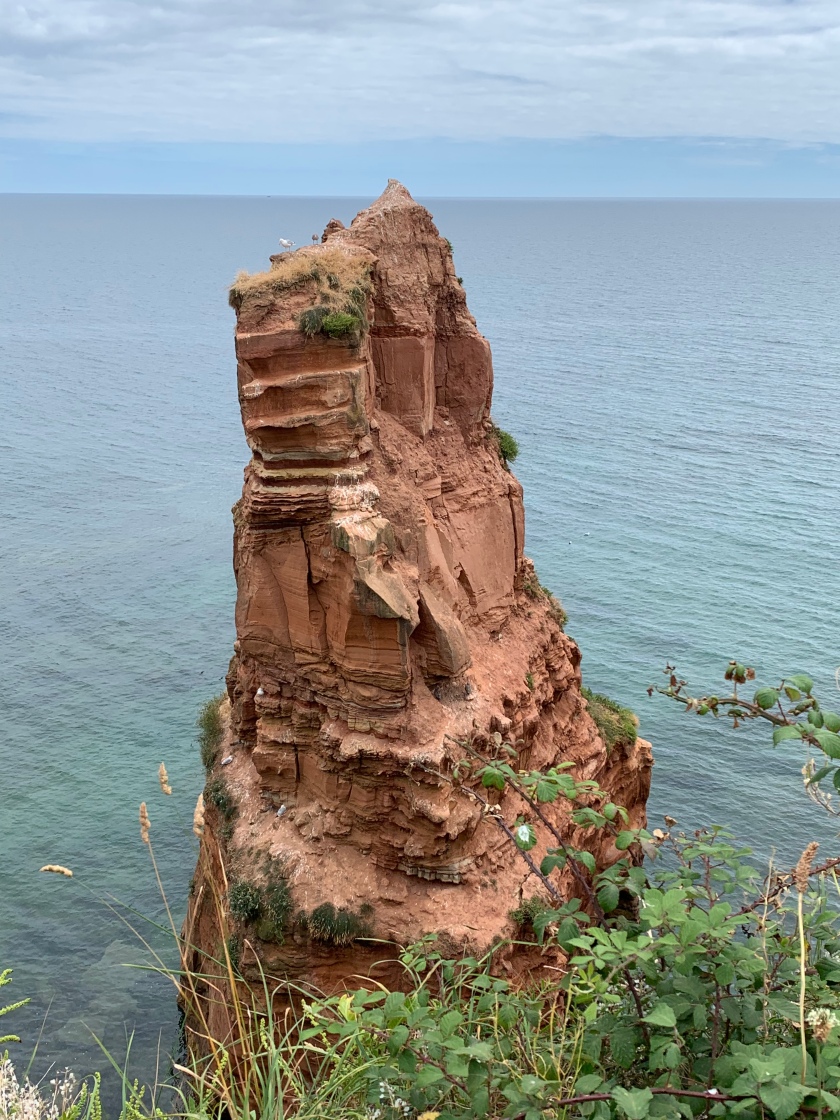 To a well deserved cream tea! So much clotted cream and jam I needed a second scone!

The owner of the cafe (The Dairy Shop) made gin – so we had to try it . We can now thoroughly recommend Sidmouth Seabreeze and Sea Truffle gin!!

A bike ride needed to work off the cream tea and, well, because Evie really wanted to! Along the front and around the local park. Before heading back for tea.

Our last day, so to make the most of it we got up early for a walk and a final trip to the park 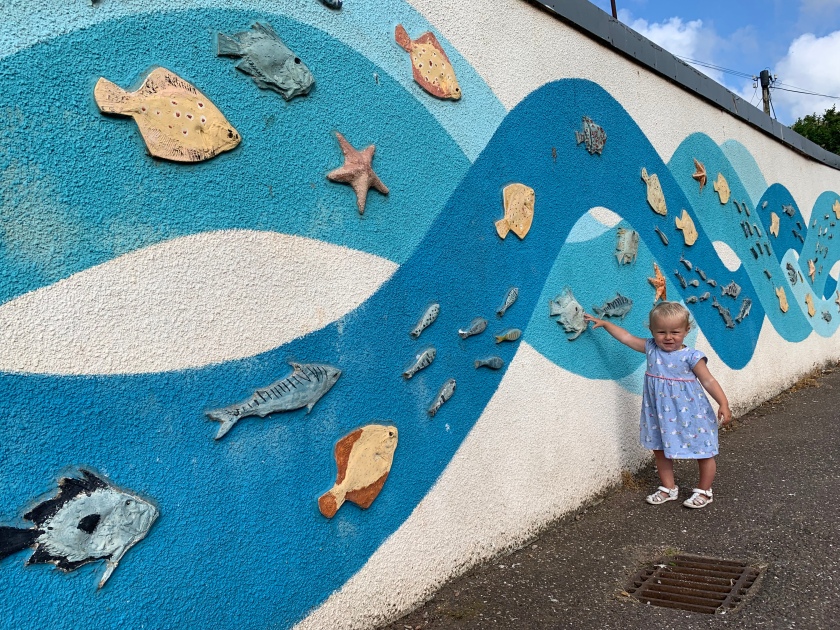 Little Miss Independent then insisted on applying her own sunscreen!

Before we headed out into the Sidmouth morning to try out paddle boarding!! All togged up and ready to go….

Getting on the board was achievement number one!

And then we were away, slipping quickly out to sea on the offshore wind…. but Hazel, Sally and Beth did a sterling job of getting us safely back to shore! 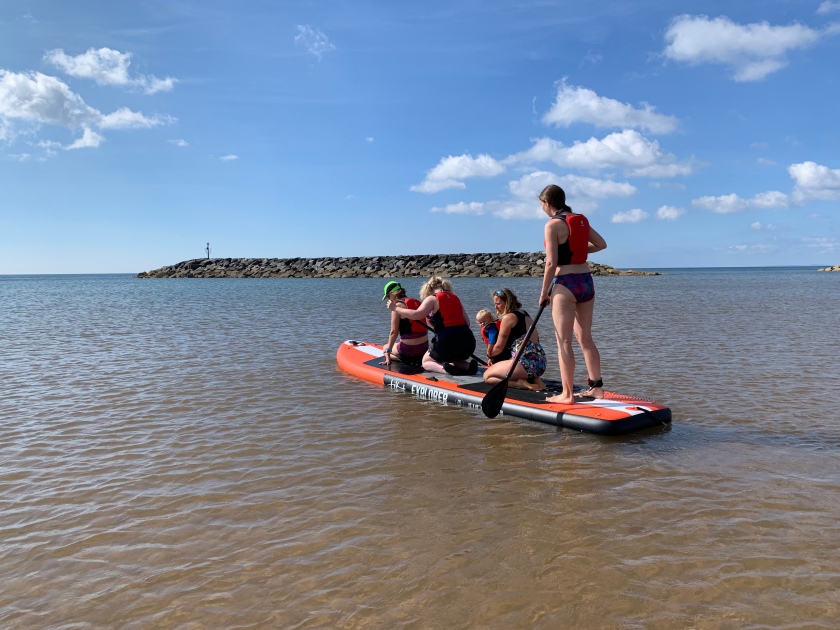 And Evie enjoyed it.

Time for one last swim and then time for Evie and me to say goodbye to the others and hit the road.

Two hours up the road and we stopped off with another old uni friend, Zeb, and his family.

Evie ran inside and got straight on with playing with the kids Dan and Ellen. 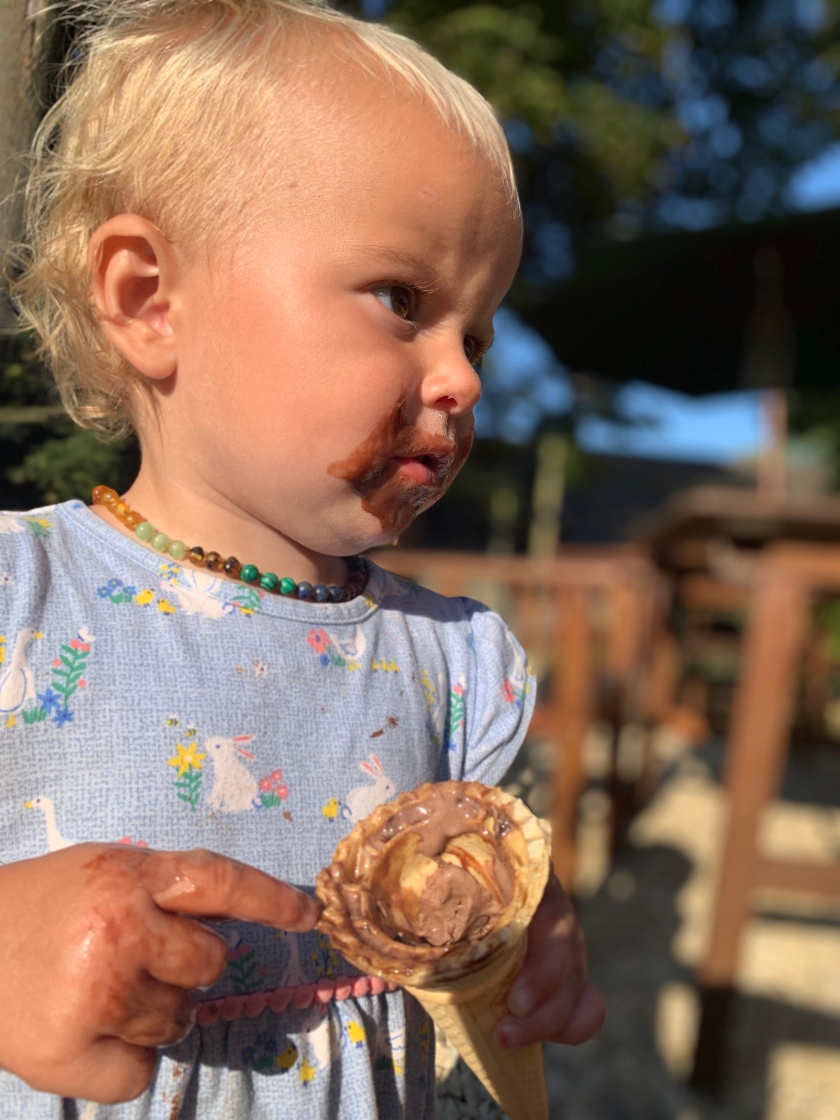 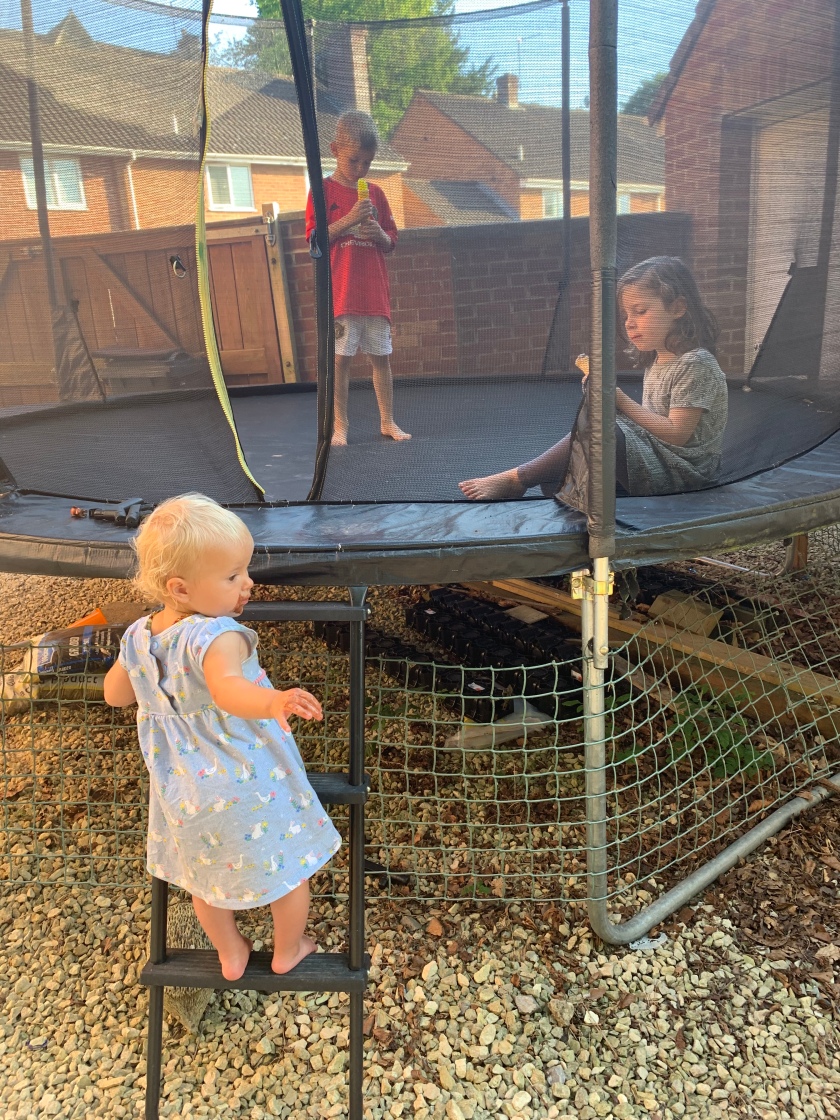 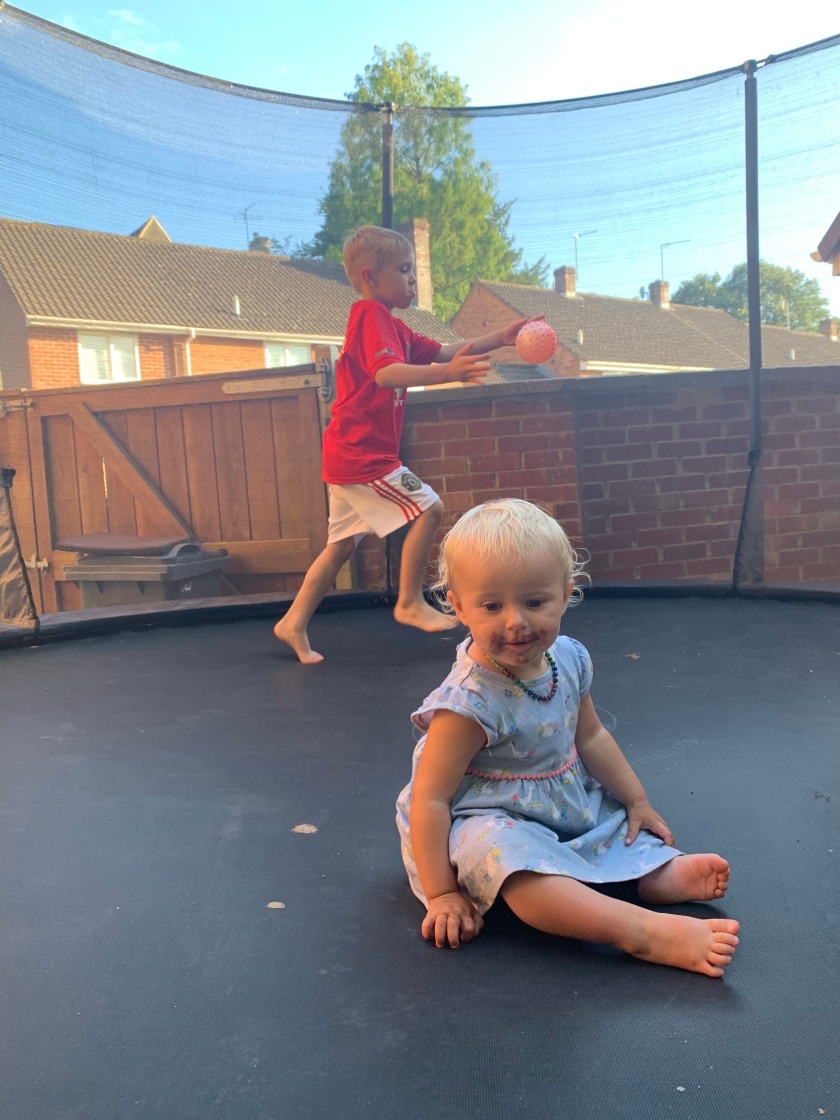 Oh what a fun way to end the day to a very fun holiday.

Shame the next day and the return leg wasn’t quite such fun. Something had upset Evie’s tummy. So after a messy start to our journey home, we finally got going. On the upside, she slept all the way home!