I was in Patterdale visiting a friend and thought I’d sneak in a cheeky walk whilst there.

Arnison Crag was not the walk I planned to do, I had meant to go up St Sunday Crag (much higher, in hindsight wouldn’t have got there). No matter how many times I looked at the map, it turns out I ended up on the wrong path. I didn’t work this out till later in the evening, asking for confirmation from some of my fell boff friends.

But the path went up (steeply) and the views were good!

It was slightly scrambly to actually sit on the summit (probably wouldn’t think twice about it if I wasn’t carrying a baby on my front).

And as I sat there, the thunder was booming and then I felt something I hadn’t felt in many weeks…. a big fat raindrop!

So Evie’s new piece of kit, the BundleBean, came out and I figured out how to put it on. Thankfully very easily.

Given the turn in the weather I made as rapid a decent as I could and wound my way through some beautiful woods at the bottom. 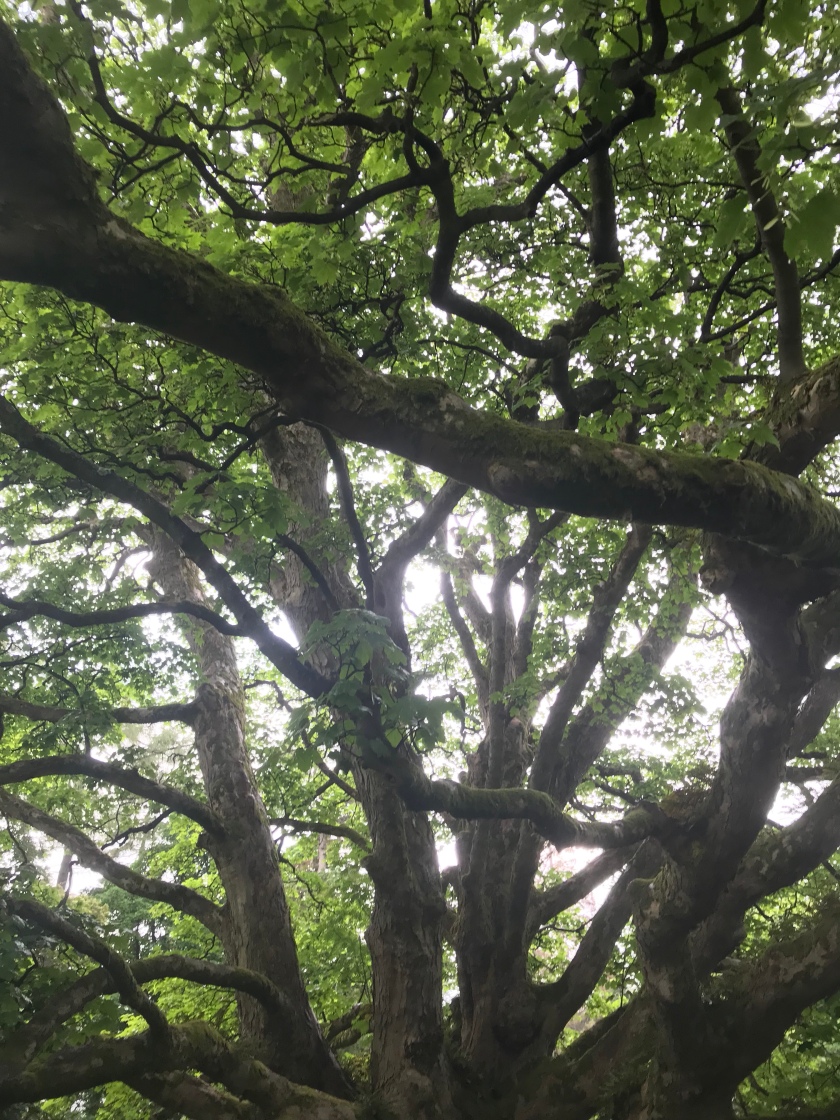 Which popped you out behind the pub in Patterdale.

Not the walk I planned, but a lovely one. And as it turned out a good one given the weather.

One of our favourites and a special place to. We parked in the Keswick streets as always, but because it had taken so long to get out the house, and breakfast seemed a long time in the past, we didn’t get beyond the cafe at the bottom of Walla Crag without first justifying an ice-cream before starting the up!!

The up we went, steady away with the climb. Gorgeous view on yet another gorgeous day. 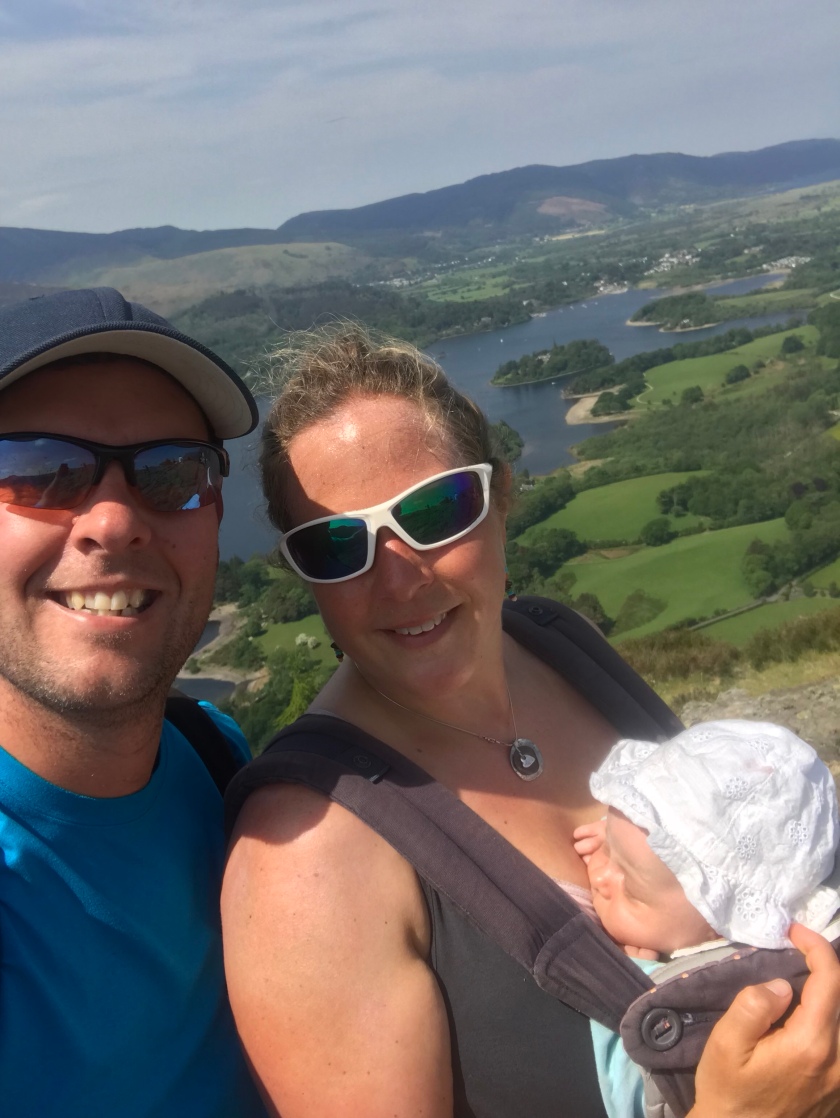 We headed back down Cat Gill, which as a bit of a rocky scramble path, is no mean feat with a baby strapped to your front in a sling! It’s amazing how much we must look at our feet without realising, which meant being super careful.

A respite from the sun walking back through Great Wood and down to the shores of Derwent Water. Or as it was on this day ‘Costa del Derwent’. Having carried my cossie with us, I enjoyed brief swim to cool off.

Refreshed we headed into Keswick to get me an early birthday present. I needed a bigger rucksack to continue with the Wainwrights!

An early 10am meet (that was still super early for us with Evie still only 7 weeks old) with some of my mums walking group,

the Bampton Amblers, for a walk up Helm Crag…. and a few more if we fancied it.

I was getting better at carrying Bean and a bag, but it was still super hard work doing that initial ascent up to the Bracken Hause saddle. There was a decision to be made. Continue right to do the round, or deviate left to bag Helm Crag.

Left it was, and worth it…. and no I did not climb to the actual rocky summit with a tiny sleeping baby. 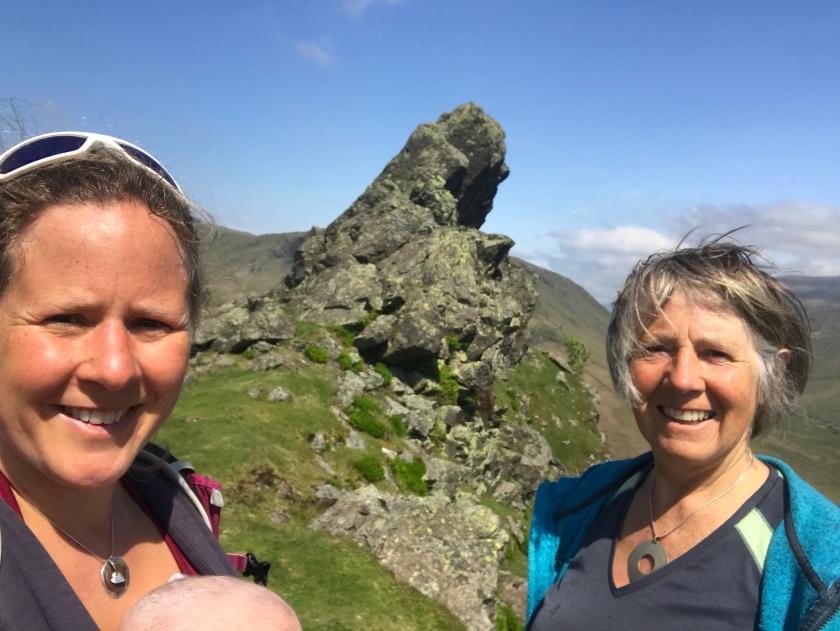 Then back down and up onto Gibson Knott and Calf Crag, and we stopped somewhere here for a spot of lunch.

Some gorgeous views and a tiny tarn deserving of a swim (but not this time).

Then for our final ascent up onto Steel Fell. The walk was starting to feel very long, but the views were still fabby.

So that left the long descent back down….. our biggest day out to date, the body knew about it. Evie slept most of the day!

On a roll and a bit too cocky.

On a map, not looking too closely, this looked a nice achievable loop. So off we set. 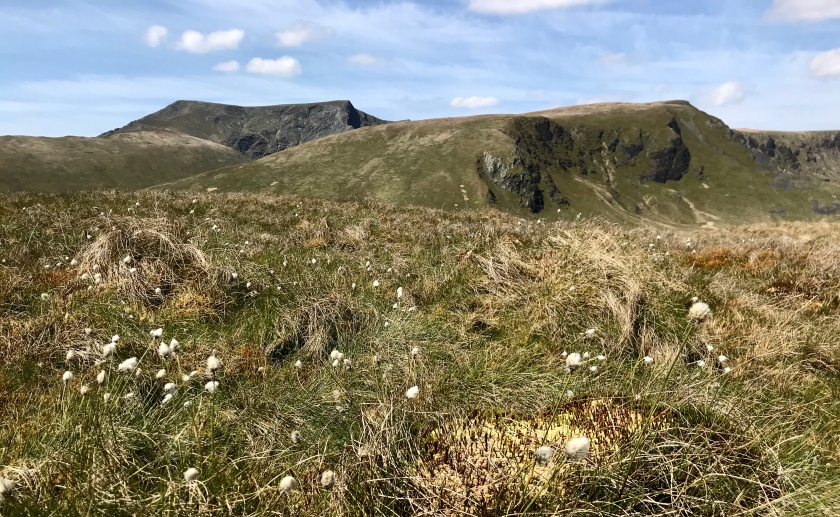 Look at the map more closely once on top of Souter Fell and I realised that there was no direct link footpath. I could see one which looked a lovely steady climb going up to Bannerdale Crags on the other side of the valley, and the ground down the edge of Souter Fell didn’t look too bad, it was dry and a beautiful day….. So I went for it.

As I started walking down it turned out that it really was as steep as all the close contours on the map suggested. Knees were sore so I thought, well why not slide down on my bum (don’t fret, Evie was secure in the sling on the front). And asleep.

Well that’s what we did, bum-sliding interspersed with walking when the terrain was more rocky. And it brought us out into the valley floor, amazingly without Evie waking up. However then another obstacle….. a wide region of heathery grassy lumpy ground to actually get to the path!

Finally to the path, I started tromping up, by this time quite hungry. Evie woke up half way up the ascent so we stopped for a double feed with a view.

It was at this point I realised I’d lost my banana in the bum-sliding descent so had less food than anticipated to fill my now energy depleted body. At least I had refilled my water bottle at the stream as that would otherwise have run out to.

Eating all I had and having fed Evie, I continued onwards and upwards to the summit of Bannerdale Crags. A new one for me; Evie was asleep again!!

Then for the final descent, which was on a path this time but almost as steep and very tough on the knees.

A glorious but tough hill day, with my sore legs I was pleased for once to get back to the car.

With Evie now 6 weeks old, for Angletarn Pikes I met up with my friend Lou ( well into a pregnancy herself) and her old but fit dog Seamus O’Leary. Given as this walk was before I thought to start this blog, looking back I now find it funny as we were trying to find a catchy title for a book for a guide to the Lakes with an ante-natal woman, post-natal woman with baby and a geriatric dog! Not quite what this is going to be, but part way there.

So it was another gorgeous day so we packed our cossies and headed to angle tarn.

Taking our time getting up the hill, both with good reason for a slow and steady approach, we decided to get in the Pikes and tick off a Wainwright en-route. Seamus seemed happy with the pace to! 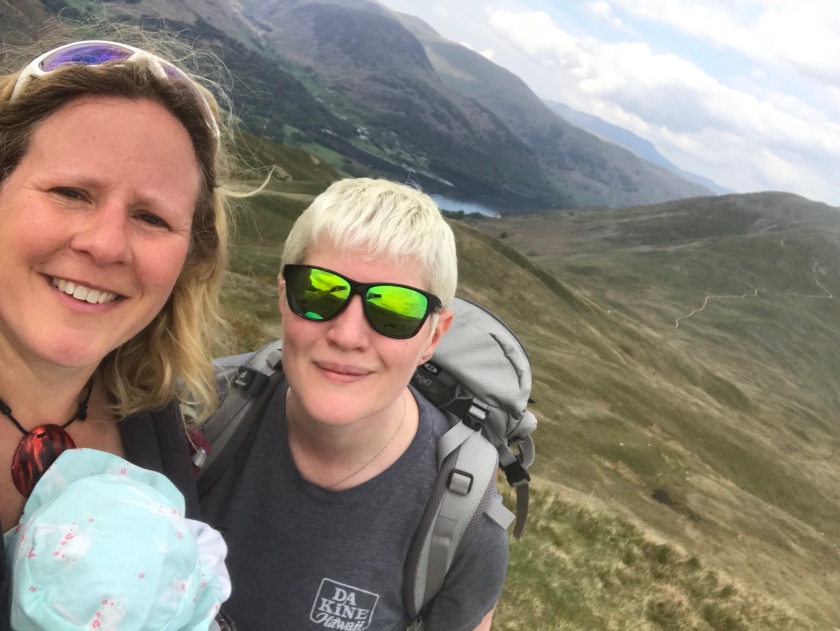 Once we reached Angle Tarn and had some lunch, it decided to get cooler. Angle Tarn is generally very cold anyway early in the year, so we swapped the swim for a jumper and headed down instead. 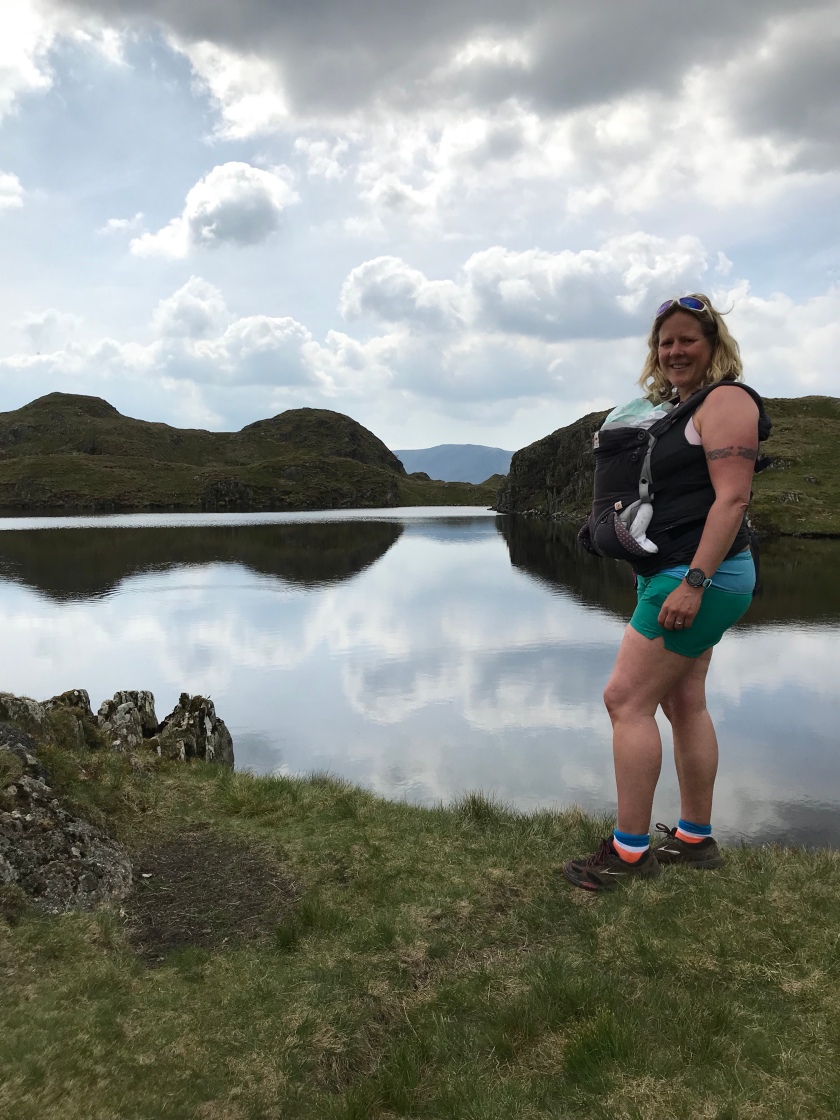 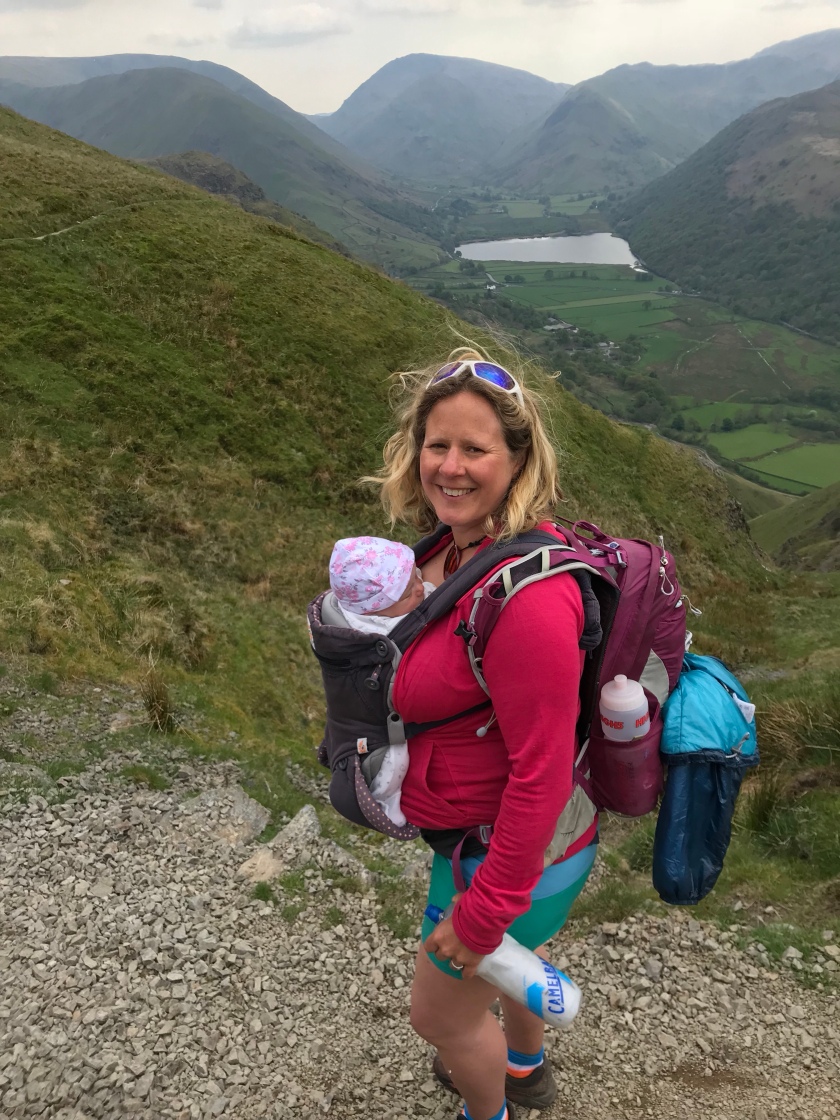 I have been walking up to Small Water since I was 3 years old and up Harter Fell when I was a bit older. I was excited to take Evie up there to see my old stomping ground.

We had stayed at my mums in Bampton, so of course there were morning bed cuddles before the day started. 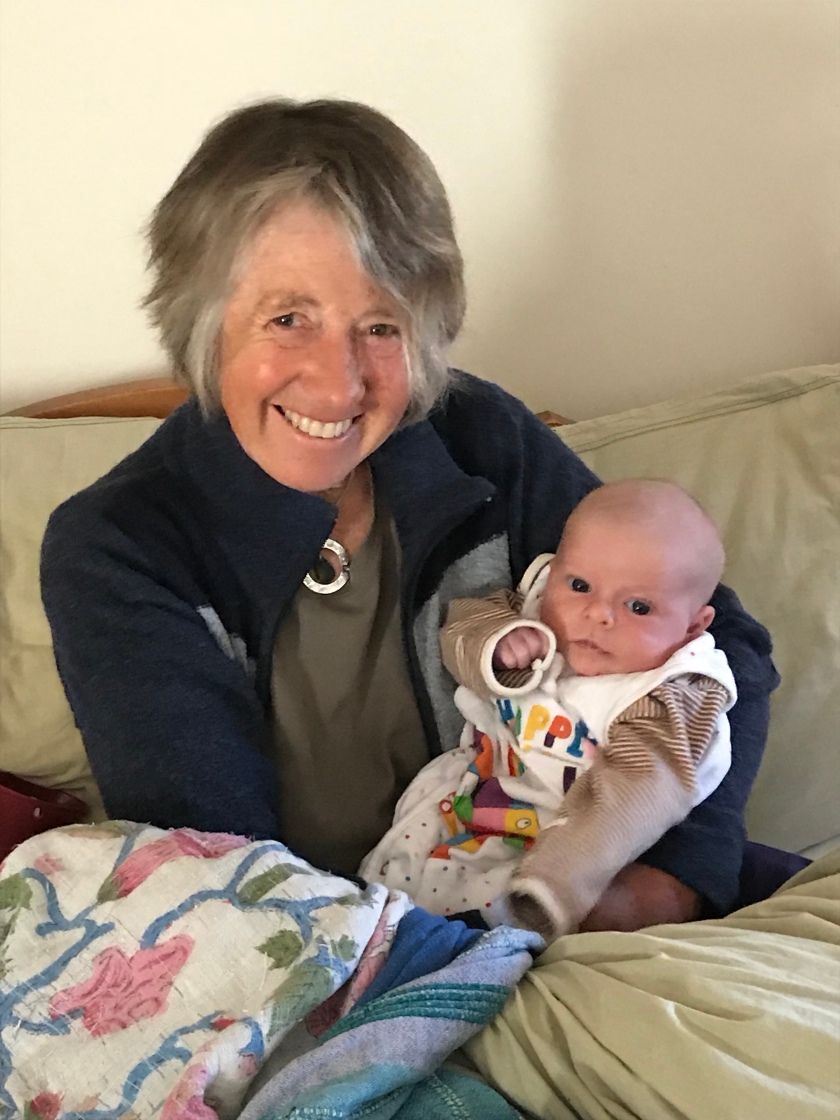 Harter Fell is a bigger walk for sure, but the weather was gorgeous and I was desperate to get going…. but not before a stop off at the Bluebell woods in Burnbanks as they are not to be missed.

Driving along Haweswater the reflections were just stunning…. this is it at its best.

After getting Evie fed, changed and in the sling we set off. Normally I would stop for a swim in Small Water, but it was just us, so as lovely as it looked, I walked on by and continued on up to Nam Biel. I was shocked to see that Kentmere reservoir, another of my favourite swim places, was totally dried out.

Evie missed the views from Nam Biel towards Haweswater in one direction and Kentmere in the other, and from the top of Harter Fell, but then she did finally wake up as we were walking back down the Gatesgarth path, so we stopped for another feed and her first up the mountain change! Loo with a view for her! 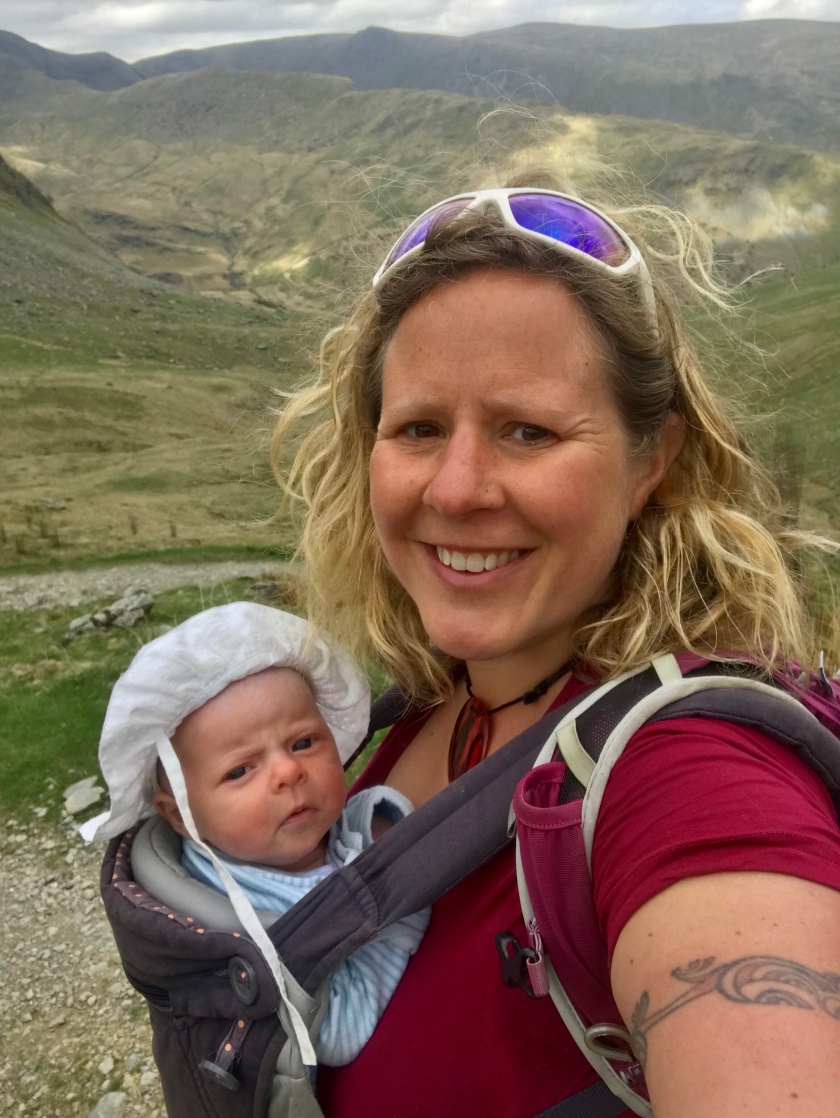 That just left the steep descent back to the car and back to Grandmas for a well deserved cup of tea! 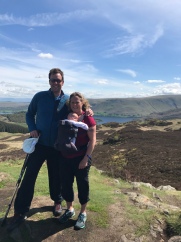 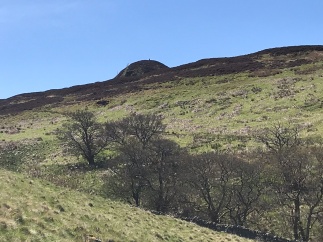 For Evie’s second Wainwright we needed a small and local one, as we were still getting used to having a baby, I was still sore and Evie was still under 6 weeks old. So we set off up Gowbarrow. However, Tim decided that we should try a new route, so rather than going up the main path it turned instead into a bit of an adventure.

The path turned into a bit of a non path, so some heather bashing and a bit of scrambling were required to actually get to the cairn on top. But it was worth it. Another amazing day and stunning view looking down over Ullswater, not that Evie saw it as once again she was asleep at the top!

We then followed a real path, though not our normal one, to get back down…. glad it was dry as normally I think it would be a bog!

A regular walk of ours, it being close to home. But today was one of those cracking days with beautiful late afternoon light, autumnal colours…. and Evie awake at the top! 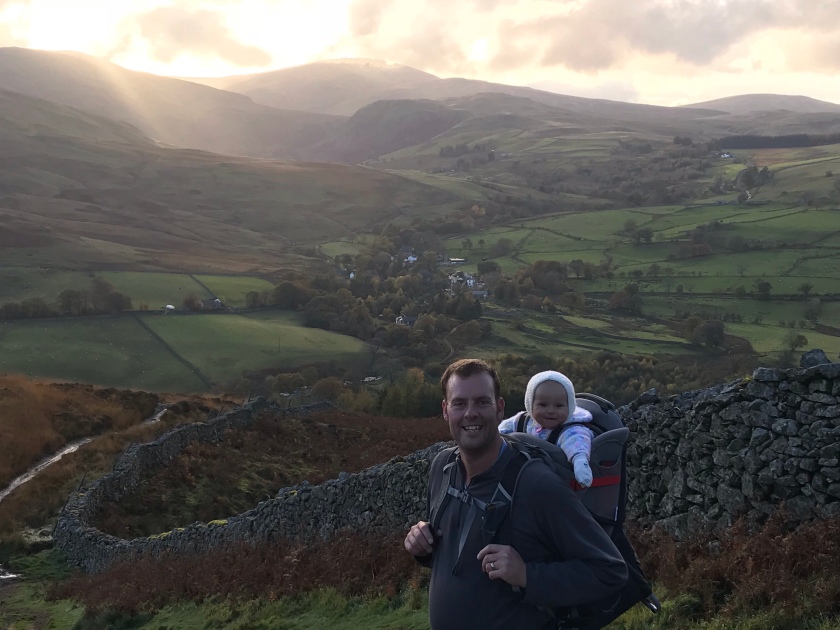 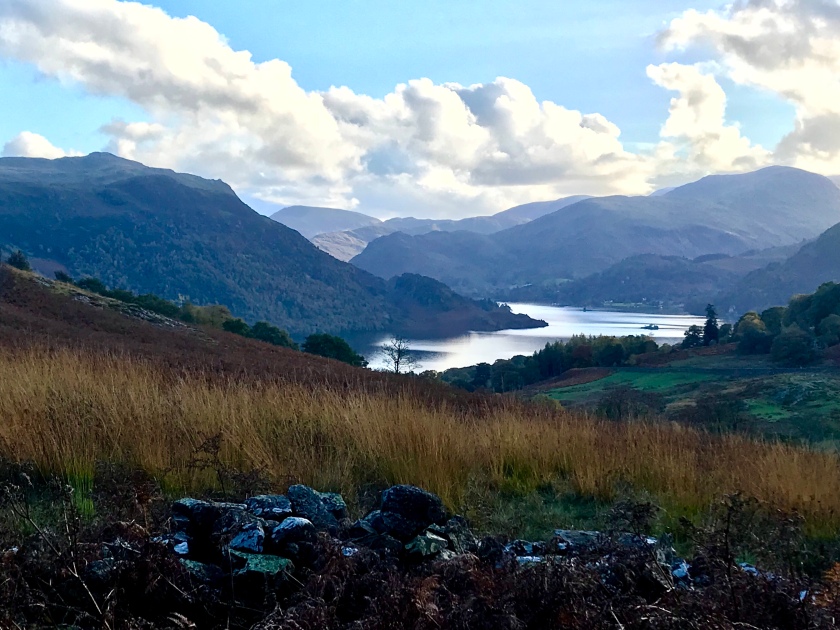 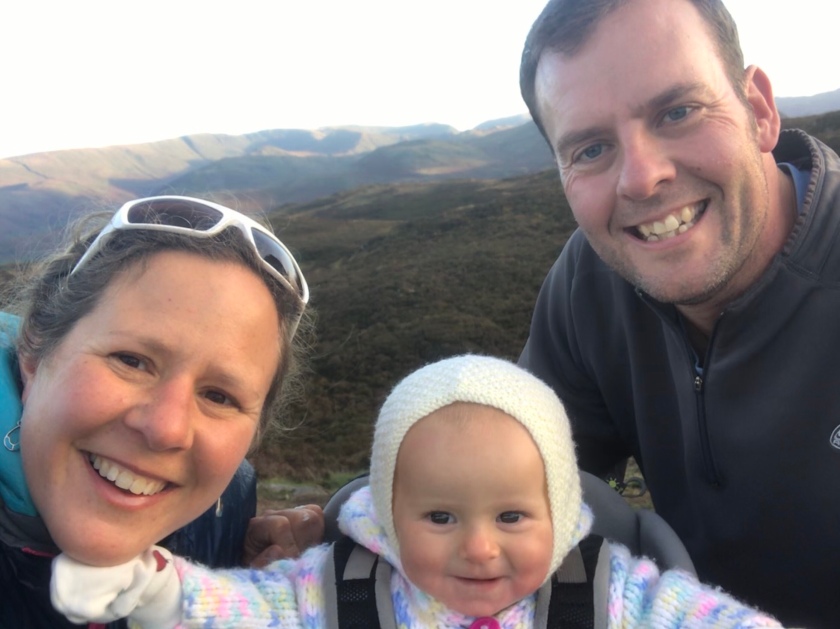 Didn’t want this day to end!

A quick walk out with Evie’s buddy Oliver.

For once Evie was the one awake!

At one month and two days old We managed to summit our first Wainwright as a new family. Those first few weeks had felt like an eternity, so getting to the top of a fell, even a small one, felt like a great achievement. 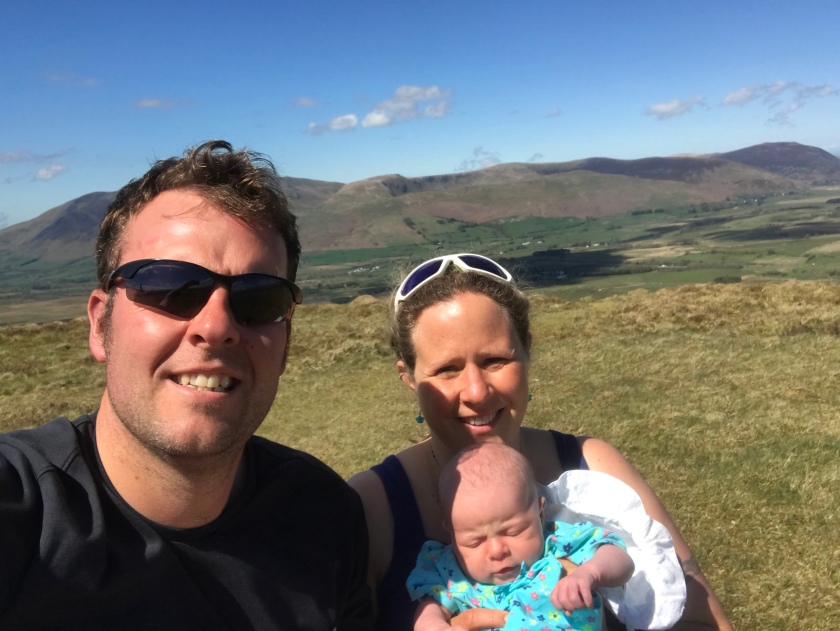 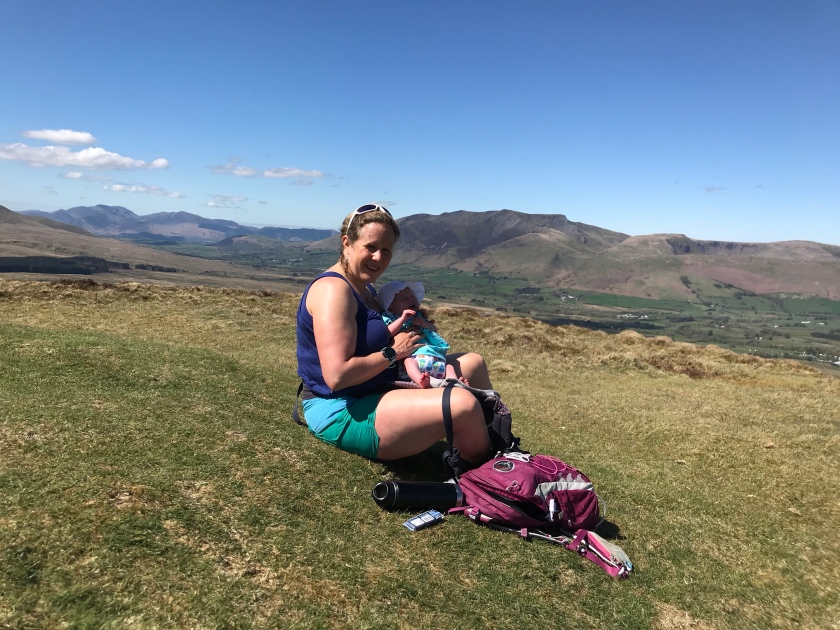 Great Mell Fell has a steep ascent but you get fabulous views for miles across The Lakes and the Eden Valley from the top. You also get to see funky windswept trees on the way up! It left me sore but was worth it.

From this point I thought that we will start to walk the Wainwrights. There are 214 to go at, so it will keep us busy. But I figured also a good way of heading up fells that we don’t walk out of habit.

Question is….. how long will this take?

As our local fell we have been up and down a few times but today we introduced our friends Hazel & Beth to this lovely little fell.

Evie enjoyed explaining the view to them!