So we got to New Zealand with an unsuccessful stopover, but what then?

Was Evie going to adapt quickly or slowly to the time change, without having the adult rationale of making yourself stay awake in the evening to try and force sleep in the night.

The quick answer is it has taken a good two weeks to find a decent sleep pattern again. And then we wreck it with some long drives!

To begin with she woke in the night and just wanted to play, jumping and clambering on us at 3am. Then by the time she finally falls back to sleep at gone 5am you are then incapable or returning to sleep as an adult (good for early morning runs as someone who doesn’t normally ‘do mornings’!).

Then the playing stopped but waking three times a night for milk, slowly down to two, one…. and after three weeks she finally slept through the night.

When a friend of mine noticed that I had embarked upon the Wainwrights in the Lake District fells with Evie (at the time only a few weeks old), she knew it was a matter of time before the spell of good weather broke and I would need some waterproof gear.

I have a need to be outside and have some exercise and fresh air at some point every day, no matter what the weather. This means that Evie, on most occasions, will also have to be outside with me. And the problem with babies is that they grow. Rapidly. Which, although I am a fan of second hand clothes, could still become expensive to be getting decent outdoor gear, when she is essentially just being carried.

So this is where my friends suggestion of the BundleBean comes in. Designed to fit over any carrier and for children up to 4 years old, waterproof and snuggly, I thought it was worth a try. The hardest decision was choosing between elephants and polar bears (amongst others) for the design!

And what timing. When it arrived I put it in my rucksack and the next walk I did up Arnison Crag in June we got caught in a thunderstorm.

With the first raindrop falling as I got to the summit, I donned the BundleBean and hoped it would keep her dry. It was a good test as the rain really came down. Back at the car she was 100% dry.

From that day onwards the BundleBean is always there in my bag, allowing me to still enjoy getting out without worrying, even when it is windy and wet.

It has other uses to, like a picnic blanket.

An out an about sleeping mat that you can even squeeze a friends twinnies into whilst we picnic and swim.

A blanket for the pushchair 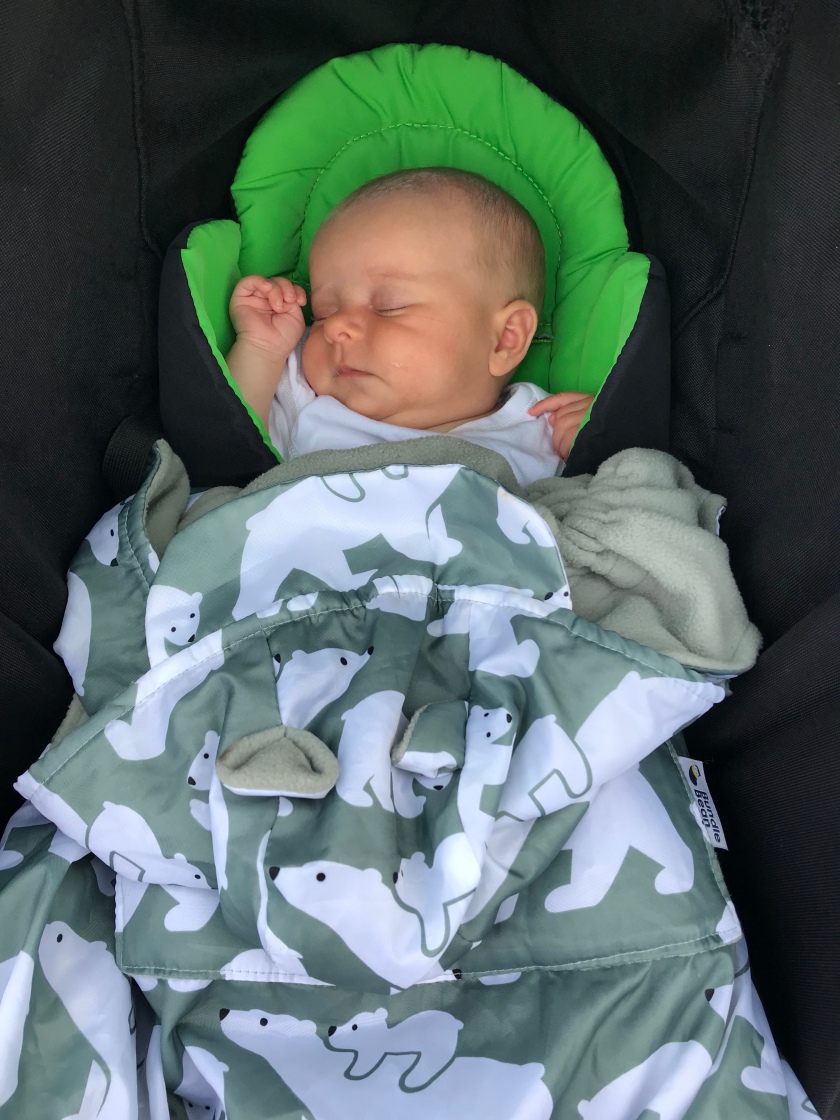 Or for when she is in the bike Chariot and it’s a chilly day!

It’s been used as a general warm blanket for when we are down at the lake (she is a bit small for her own Dryrobe yet!)

It makes for a good beach towel!

And very importantly, the design has thought about the parents to, as there is a fleece lined hand warmer pocket for when it is used on the front. Important, as if you are anything like me, whilst Evie is small and still in the front sling, I instinctively like to hold her as well.

We recently trialled it on the back as Evie is growing. I’m pleased to say it seemed just as effective keeping her dry in an alpine thunderstorm. 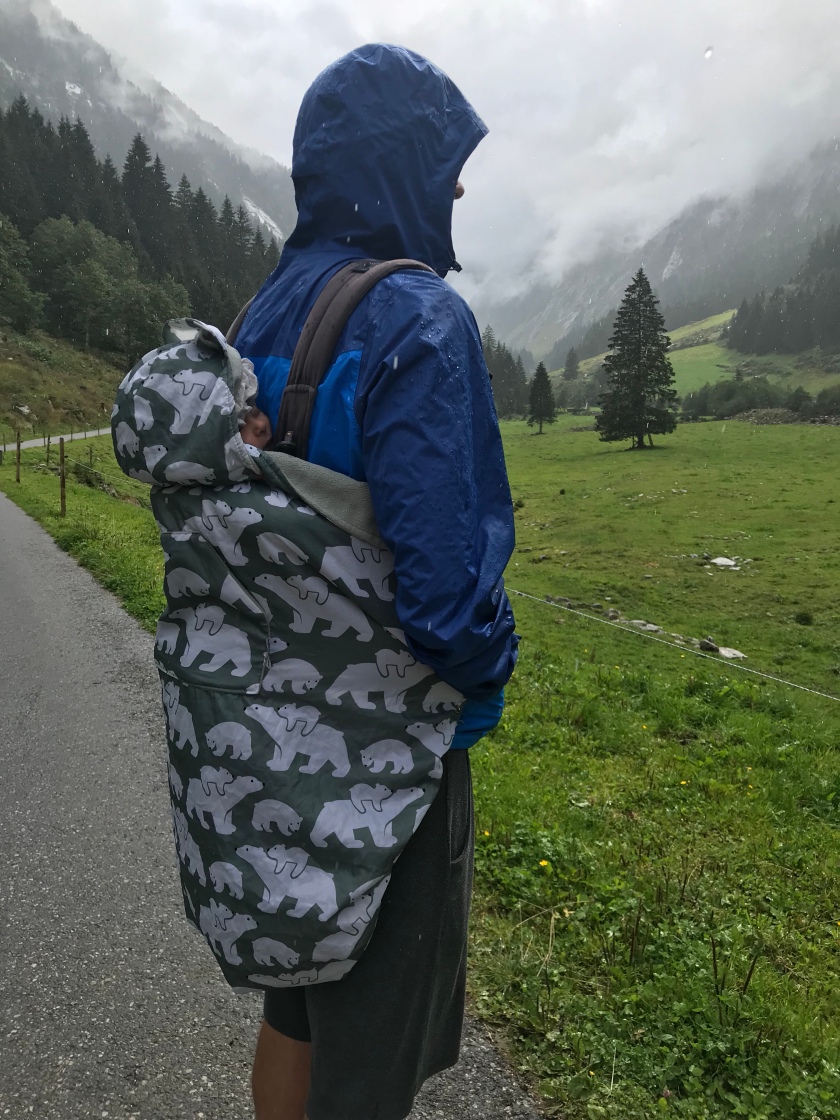 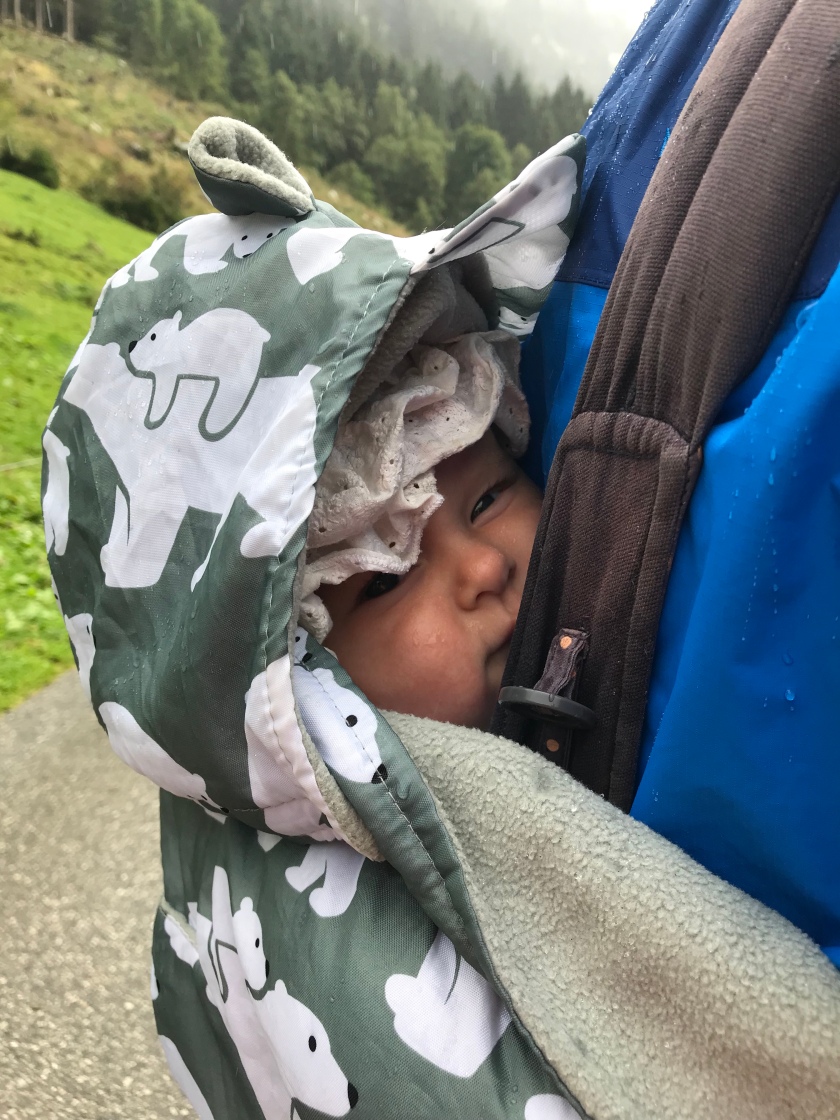 Evie is almost, but not quite, ready for the rucksack…. as we head into Autumn. I have no doubt I’ll be testing it further when using this as we get more rain.

I am writing this as a reminder to myself in the future, when Evie has grown into a little girl. In the hope she will being riding her own bike some of the time, but maybe get tired and need some help along the way.

I saw this contraption in Germany and have seen a few variations along the Danube cycling trip, and they seem to make it possible to allow kids to have independence when they have energy, and help when tired. Therefore allowing families to cover reasonable distances! 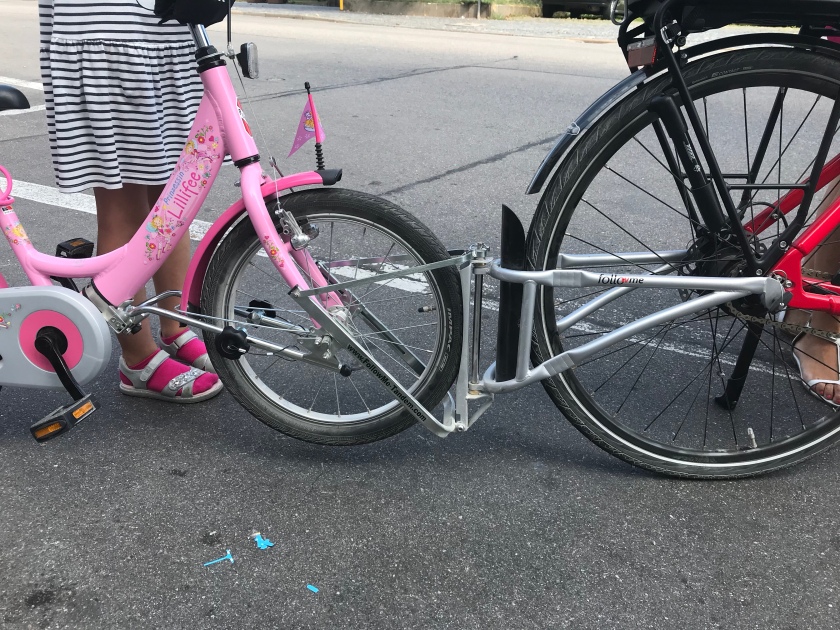 I’m not even exactly sure how it works, except that when not in use it live on the parents bike. More weight = greater fitness training!!!